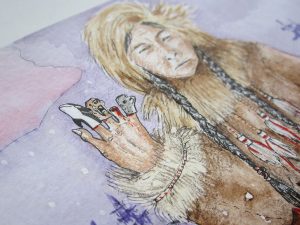 This goddess is another composite, from the First Nation tribes of the far North. She appears in various forms from Alaska to Greenland, amongst the Inuit and Aleut peoples. Other names for her translate as “Mistress of Sea” or even “Big Bad Woman”

She appears in one of three guises – as a purely human form, as a half fish, and as a half seal. She has strong associations with sea mammals – in some versions she is the mother of them all, in some she merely has control over them. She frequently has long ratty hair – reminiscent of seaweed. In some versions she is beautiful, in others she is an old hag.

The principle creator for that part of the world is Raven who makes many things with his powerful gaze. So, I have chosen him to be the spirit whom she marries to gain her divinity.

Story of the Goddess

Sedna was a mortal woman who lived with her father, who was a good hunter. She never lacked for food or warm furs, and so was very comfortable at home. Many Inuit men came to ask her hand in marriage, but she refused them all.

One day, a handsome stranger came to the village, who had black eyes and black hair. Eventually, Sedna agreed to marry him, and went with him to his house, which was on an island with no one else but seabirds for company

“Now, I will care for you and love you in this house. There are but three rules here. You must eat only the food I bring you. You must wear the clothes I have provided for you. And lastly, but most importantly, when I leave the house, you must not follow me” said the husband.

For a time, Sedna was content. Each day, Husband left the house, and she stayed indoors so that she did not see where he went. Each day, he returned with food for her – sometimes the fish and meat she was accustomed to, sometimes exotic foods from far away.

In time though, Senda became jealous. “I’ll bet he has some mistress somewhere – that’s why I must not spy on him” she said to herself, and she resolved to follow him the next day. She had learned a little magic from her father, and used it after breakfast to make herself invisible.

Husband left the house and Sedna crept after him. When husband reached the shore, he didn’t climb into the little boat, but went to the clifftop and bowed his head. Great black wings sprouted from his shoulders, and he swooped away, leaving Sedna to recoil in horror, that she was married to something that wasn’t human.

When Husband returned that evening, she was standing on the steps of their house waiting

“What are you, that you grow wings and fly away from me?” she howled

“Ah, my love, I am Raven. The food I was feeding you was to turn you into a goddess to live beside me and help me to make the world. But now that you know, I cannot turn you. You must forever live as part of this world and part of the next. So I will set you to rule over the sea, where you can be both divine and mortal in parts. The souls of those who pass on at sea will be your people, and the animals of the sea will be your servants. And sometimes I will come and fly over you, and renew you, and will still love you, despite you disobeying me.”

And Sedna sank into the sea, and became the ruler of it. Sometimes, when she is content, the sea gives up its bounty easily, and men prosper. But sometimes, when she rails against her fortune, the sea tosses and turns as she wails, and men die to feed her despair.

Sedna does not have temples per se, but there might be shores where she is particularly reverenced. Perhaps underwater grottos house creatures loyal to her, who guard all the treasures lost to the sea. Given the right access, one could even explore her ocean-bed palace.

Sedna is not so much worshipped as feared, She might not be followed by many living folk, but ghosts and undead might well constitute her ‘people’ She might also be appealed to by those who have lost loved ones to the sea – to whom she might conceivably grant spells, from sea creature control to invisibility to necromancy.

The story here features a mortal becoming a god. Does your storyworld allow for such apotheosis? Perhaps your protagonists are seeking to become gods – or to stop someone else from achieving this? Do the current gods welcome help, or are they jealous of their divinity?