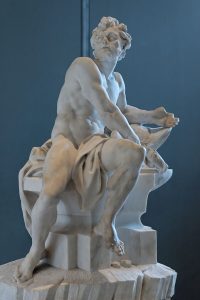 It may be cold, but Vulcan would never let that slow him down, so we haven’t either.

More than just Hephaistos reskinned, the Roman version of this god owes a lot to the Etruscan god Sethlans, and also to the Cretan god of the natural world Velchanos. As usual,it looks like as the local peoples are conquered, the Romans take aspects of their gods and weld them onto their own deity. This may be rather the other way about, hence the name sticking around.- Hephaistos is more about the beneficial aspects of fire; Velchanos is the master of natural disasters. Prayers to Vulcan – particularly on his feast day, in mid- August – tended to take the shape of ‘please don’t let my house burn down’ than any appeal for aid with construction.

His principle forge is located beneath Mount Etna, but all volcanoes are his domain. Temples to Vulcan were typically located outside the city limits, since most featured a forge and hence the risk of fire. The biggest was within Republican Rome, but had been outside the gates of the rome of King Titus, who is supposed to have built the temple.

As usual, the tale is adapted from the original – I’ve incorporated elements of a different myth to show how Talon was made. Few tales mention Vulcan, despite his importance to the pantheon, and even fewer feature him as a major participant.

The Olympians held their collective breath, as Hera bore Zeus another son. Three days and three nights she struggled in labour, and the child when finally born was crippled in one leg.

Horrified at what they had produced, Zeus cast the infant Hephaistos down from Olympus, and he landed on the island of Lemnos. When he was launched he was an infant god; by the time he finished landing, he was the size of a small child.

A fisherman had sailed away from home to trawl the rich fishing grounds near Lemnos. With the storm and earthquake of the god’s landing, he had caught no fish, so had room for a foundling child. The fisherman took Hephaistos – who could say nothing but his own name –  home to the island of Crete, and handed him into the care of the king, Minos.

Because of the volcano that had sprouted at the core of Lemnos, they called the child Vulcan, and he lived in the palace with the royal children. From the very beginning, he learned all the smith-lore that the Minoans had, and all their craft.

When Vulcan was grown to a man, he decided to make a great work to thank his foster family. The Minoans were great sailors, but they had little by way of an army. So Vulcan resolved to make a force whereby the Minoans could safely sail away, leaving Crete in the hands of the Bronze Man.

He began with bones like the bones of the hills, carved from granite.

The bones he covered with flesh of the finest bronze – copper from the mountains, and tin from the edge of the world.

Into the veins of the creature, Vulcan poured living lava, to warm and to animate.

He inserted the heart of a bull, so that his creation would be strong and vigorous.

Lastly, he told the automaton to wake, and gave him the name Talos. And Talos woke, and went to guard the beaches of Crete.

The Argonauts had sailed far when they came to the coast of Crete. As ever, the great bronze man patrolled the beaches, and they could not land. Cunning Medea went in a little boat to shore

“Hail Talos, faithful servant! I am sent by the gods to reward you with immortality. This vial contains ichor, which flows through the veins of Zeus and Apollo, and Hephaestus your father. All I need do is pour it into your veins and you will live forever”

“My veins are sealed by a single bronze nail, in my right heel” said Talos. And he lay down on his front so that the witch could take out his nail, Perfidious Medea let out all the lava within, but did not replace it, and the bronze man lay dying on the beach

The Argonauts not only took advantage of this treachery, but took the body of the bronze man onto their ship, as trophy and as plunder.

Without their staunch defender, the Minoans were quickly defeated by the boatload of heroes. One of their number, Amphidamas, stayed behind to rule Crete, and so the crew was diminished by their victory.

After they sailed away, the people of Crete rose up in revolt against Amphidamas. The new king declared that each home should make a statue of Talos, and bury it beneath their threshold. In this way, the spirit of Talos would continue to defend the people of Crete.

He is almost certainly followed by blacksmiths, but other crafters might pay homage too – especially any who use fire, from cooks to shipwrights. Seers who inhale volcanic gases might also be amongst his worshippers, but these would likely be rarer. Strangely, there might be a handful of bards in the congregation, playing brass instruments, since Vulcan is supposed to have made the first trumpet as a gift for Apollo

Temple complexes to Vulcan are likely mostly protected by their environment, featuring lava and fire trenches that are both numinous and protective. Creature defenders tend towards salamanders who can withstand heat, or magically protected strong beasts – lions, bulls, or bears.