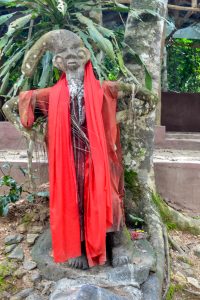 Strictly, Yoruban is the name for the people, not the faith, but I’m stretching to it in order to show an interesting worldview that would otherwise be missed. We’ve looked exclusively at polytheism, and assumed for storytelling purposes that gods are immanent and not omnipotent, omnicognizant nor omnipresent. A god that does not intervene makes for a dull character; a god that can solve every problem without effort makes for a dull story.

The Yoruba worldview has a single powerful god, whom they call Olodumare. But this god is distant, and works mainly through proxies – the Orishas. There are dozens of these, each with their own specialisation. They often include the ancestors of the supplicant, and are not supplanted by conquest – the new orishas supplemented the old ones. Each babalawo (priest) would have his own array of favoured spirits.

As people from sub-saharan Africa were exported in the slave trade, they took their beliefs with them, and syncretised them with the dominant Catholic faith. After all, the Christians were powerful – did it not follow that their spirits were powerful too? The daughter faiths found in the New World are often incorrectly described as voodoo; more accurately Santeria, Candomble, or Voudoun – dependant on both the African root and the Christian variant.

Be clear, none of these faiths are demon-worship, any more than a faith in Odin or Apollo or Raijin. The orishas – be they locally referred to as ancestors, loa or saints – may require some kind of sacrifice to entice their blessing, but the black cockerel whose blood is spilt over the altar is no more devilish than the calf which the priests of Zeus would sacrifice, and use for divination. The desires and motivations of these spirits run the whole gamut of human experience, so some could be viewed as evil – but this is judged in the actions of individuals, and does not reflect on the faith as a whole.

Because many of the best stories have been lost or exist only in fragmentary form, this tale is more fiction than usual.

Story of the Pantheon

Olodumare looked across the face of the waters, and saw that this place was rich for the making of life. So he conceived in his thought and whistled three of the orishas to come swim in the sea

Obatala the Maker took a mollusc shell and swam to the bottom of the ocean and dug out a piece of the sea floor. When he brought it to the surface, Shango the Flame breathed his fire on it and cooked it, so that it did not dissolve as sand, but came to be rock. Then Elegua the Walker took his big feet and walked over the new land, and made hills and valleys with his walking. And so the world grew.

But all this land was barren.  So the first three orishas whistled for help. Yemoja of the Water took her littlest finger, and began to poke holes in the land. Where she worked, sweet springs came to be. And Oya the Wind blew across the land and the seeds that were hidden came into view, and began to sprout. And so the world grew.

Eshu the Trickster was sad, because nowhere in this paradise was there room for his mischief. So he went here and there and took a little mud for flesh and a little wood for bones, and he made himself manikins. And he animated them like puppets to dance for him.

When the other orishas saw the things Eshu had made they were worried for their creation, that Eshu’s puppets would spoil it.

Olodumare said that all things have the place in this world, and that these men should govern and guard the world, and someday become orishas too. So each of the orishas gave the puppets gifts, to help them be the best guardians.

Shango gave them warm blood, and the desire to make their world warm and safe.

Yemoja made them virile and fertile and gave them a desire to mate.

Oya gave them swiftness and a desire to look always elsewhere – to the horizons, and up at the stars

And Ogoun gave them the power of making – in wood and metal – and the desire to transform that which they saw as not good, and improve the world.

Olodumare smiled on all these things, and gave them his blessing, that they might grow and develop of their own accord. And Olodumare saw that the making went well, and left the world in the care of the Orishas

And so the world grew, and grows yet. And wise men know that this world is a gift, and that we were meant to guard and govern it, not to ruin it.

One aspect that distinguishes orishas from other types of spirit or deity is their habit of possessing worshippers. Whilst this can make for a powerful story device, it needs to be otherworldly and alien, otherwise the impact of being so directly touched by the supernatural is lost in the mist. Does the mount know what the spirit does in his body? Can he direct the spirit at all?

More than any of the other faiths we have examined, followers of the Sub Saharan and Diaspora faiths are likely to call upon multiple orishas (loas, saints)  for aid. Spells to control fertility might implore Oshun for aid, whilst divinations call upon Orunmila. Pick spells first, and then decide which spirit grants that spell, and what they require in exchange. Perhaps some only desire song or dance, or a promise of regular attendance at a worship ceremony. Others may require a chicken, a dollar, or some other sacrifice.

Given that following these faiths was for many years illegal (and still is in some places), a temple would either be hidden in wilderness, or constructed and deconstructed for each faith ceremony.  Either way, the adherents are unlikely to view the intrusion of a treasure-seeking adventuring party in anything other than a hostile light. If the punishment for taking part in such a faith is harsh, the faithful have little to lose by fighting the intruders. Protagonists would be better served cautiously courting such congregations if they have need of their help.