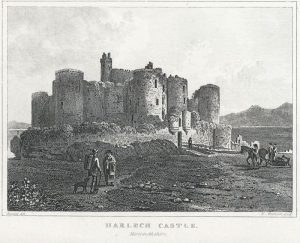 Before Edward’s troops took Harlech in 1282, it was already a site of importance to the  Welsh, as it was associated with Branwen, a major figure in the Mabinogi – a core set of tales of Welsh myth and history. In one tale Branwen was married to the Irish king who treated her poorly, so her brother Bran invaded Ireland – and it all started in Harlech.

Once the site was secure, a castle was ordered to be built there immediately, and it was completed by 1289 (castles take a while to build, especially in enemy territory when you have to ship in your work force). It is built on a large spit of hard rock called the Harlech Dome, giving it a commanding view of the surrounding land and sea – when it was built the sea came right up to the rock, but it has since receded. This made the apparently remote location strategically important as it could control the land between the Irish sea and the mountains of Snowdonia, as well as approaches by boat from Ireland.

The dome is extremely steep on two sides, and a deep ditch was cut into it on the other two, making the castle almost unapproachable from anywhere but the designated bridges. The main entrance contained three portcullises and a large well fortified barbican (or gatehouse) to complement the steep, narrow approach. There were three concentric rings of walls, with one at the bottom of the Dome all the way down to the water, then around the castle creating an outer ward, and then the main walls of the castle itself. This combination made it an extremely strong castle well able to withstand siege – something that would be proved several times.

In its heyday the quarters of the constable and the guest quarters (probably in the gatehouse itself) would have been reasonably comfortable, and the rest of the castle was well appointed with a great hall, large kitchens, barracks, stables and so forth. Archaeological evidence suggests the courtyard would have been a hive of activity, with many wooden buildings of various functions. Despite the small population of mostly soldiers, it would have felt crowded, noisy and smelly, and perhaps even claustrophobic during the sieges.

The attempts to quell the locals was not exactly successful. In 1294, just five years after Harlech Castle was completed, Madog ap Llywelyn led a revolt against Edward’s occupation of Wales. Many castles were besieged, and while the far more expensive and ornate Caernarfon Castle fell to his forces, Harlech held out – despite only having a garrison of 37 men by the end! The access to the Irish sea was key to resupplying the castle that winter, and after the war the outermost wall was built to protect that access in future. Harlech was not key to that rebellion, however, and it was eventually quashed the following year in Powys, with Harlech never being relieved.

The Welsh tried again a hundred years later when Owain Glyndŵr led an uprising against the English in 1400. This time Harlech did fall, but it took until 1404, and was one of the last English castles to do so. I don’t know how many people were inside, but records suggest they were severely under equipped – they had only three shields and eight helmets between them! Glyndŵr made Harlech one of his homes and his seat of power – he held parliament there the following year.

In 1408 the English laid siege to Harlech once more, and even assault by cannon could not beach more than the outer walls. In 1409 the castle fell after the troops inside literally started to die of exhaustion – that must have been a particularly horrific winter for those inside, slowly losing a war against an occupying force with dwindling resources and little hope of resupply in the Welsh weather.

Despite the loss of Harlech (and Aberystwyth Castle, his other home) Glyndŵr remained free, and didn’t give up his rebellion until 1410, but the fall of Harlech was one of the key points signifying he had lost. (That whole rebellion is fascinating, but is outside the scope of this article – perhaps we can do a series on rebellions some day)

Wars of the Roses

Things were comparatively peaceful at Harlech for the next fifty or so years – although much of Europe was still at war it didn’t impinge on Wales. Then the Wars of the Roses started up. In 1461 Queen Margaret of Anjou fled of Harlech. She was the wife of the Lancastrian King Henry VI and at times de facto ruler of Britain. She lived there for the next seven years. During the time the castle was besieged by Yorkist forces in what is said to be the longest siege in British history. It is about this that the song Men of Harlech was written. Despite the siege, the castle was a key seat of political power during the wars, and military power across the region.

Things came to a head in 1468 when Lancaster landed French reinforcements there, and the Yorkist King Edward IV responded by sending an army of 10,000 men to take the castle (This is probably not what the nursery rhyme is referencing). Even facing such a huge army and taking heavy damage, a small garrison was able to hold the castle for a month.

It would be almost two hundred years until Harlech would become important again, and during that time very little repair work was done on the castle. Only the gatehouse was in a good state of repair, and was used as a court. In 1644 the Royalists started work on repairing the rest of the fortifications, In 1646 the Parliamentarians laid siege to the castle. The war was turning against the Royalists already by this point, but a small garrison held out for almost a year, and was eventually the last mainland Royalist castle to fall, when the remaining garrison of only 44 surrendered. Its fall ends what Historians call the “first phase” of the English civil war before it started up again in 1648.

In that gap, Parliament declared that Harlech, along with many other castles, be demolished so they could not be used. While it was not entirely demolished, it was damaged to the point of uselessness, and was never again the site of a siege.

Harlech is a castle with a lot of history. Much can be, and indeed has been, written about every phase of its past. There are so many details which could be pulled out into games and stories – each siege had different political motivations, each war differnt sparks – that it’s hard to know where to start! I will limit myself to three suggestions:

Harlech is a site of symbolic importance. It’s a place known to myth, and home to Owain Glyndŵr. It’s a key place to Welsh identity. So perhaps you could use a castle as a symbol of identity – when an uprising starts, it may focus on taking a certain key castle first, or it may start with the lord who occupies it, and his position is enough to get many people on side. Or maybe one side wants to take a symbolic castle to crush the spirits of the other – even if the castle isn’t directly important it represents far more than just the stone from which it is built.

Harlech was a home to queens and princes. Queen Margaret fled there as a safe haven. During time of war, where do your royalty go? Can they rule in exile from a strong point/ A powerful defence would stop the enemy from preventing the political influence of their foes – it is very hard to stop information getting in and out, even under siege.

Or perhaps you could could use a siege as a setting. The feelings of claustrophobia and being trapped, cabin fever could run high. Maybe your characters need to find a way out, past the besieging army, or keep someone inside safe when the gates finally fall. Alternatively they could be on the outside trying to find a way in, testing the castle’s defences, keeping watch and trying to understand what is going on the other side of those impenetrable stone walls. Finally, maybe there is a resupply run – the depths of winter, trying to sneak a large amount of food, weapons, ammunition, and whatever other supplies are needed past the besieging forces, and then once you’ve managed that, trying to get out again!