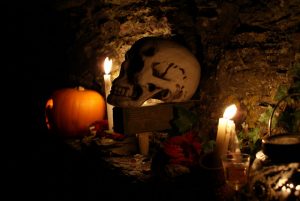 This time of year is associated with ghosties and ghoulies and long leggedy beasties. But why? Apart from “it’s cold and dark and time for fires therefore stories”.

The derivation of Halloween from Samhain is a classic example of cultural evolution.

The exact details of the original festival are unclear, because the Celts wrote down very little – most of our sources are later and/or Roman, and thus it is akin to studying the Blitz using only present day memories or German sources. Still, we know many of the details, and as the festival never fully died out much more can be recovered from the later forms.

The world of the ancestors flows away from and towards our own, and comes close four times a year – at the beginning of each of the seasons. At Beltane – Mayday – the helpful spirits of the land cross over, and their blessings are welcomed with flowers and dance as summer begins. But at the beginning of Winter, darker spirits roam, and meeting one brings only curses. So the prudent householder would bribe the spirits with whatever he had excess of to ward off their ill will. The barley harvest falls in early September, so six weeks later, the first beer of the new year would just be ready, apples have also just been harvested and milk is less seasonal, so these became the traditional gifts. If one had a good harvest, one would share with neighbours, so that the spirits would see one as a good friend and be unable to harm the good man.

Young people would dress up as “spirits” and wander the village, claiming the bribes on behalf of the spirits. After all, are we not kin of the ancestors – and if they don’t turn up in person, don’t let it go to waste! The fact that the feast falls at the end of a period of very hard work – preparing for winter – probably contributes to this part of the celebration

Enter Christianity. The early church sought to adapt facets of the older faiths – it’s why Christmas falls so conveniently at Yule/Winter Solstice. The old spirits can’t possibly be good, therefore they must be devils. And anyone who feeds them must be witches. Of the old-crone-cursing variety, not our modern follower-of-a-nature-faith variety.

So, the Church co-opted the idea of reverence for the gone-before, and invented All Saints and All Souls – an opportunity for any local do-gooder to be remembered and prayed for, reducing time in Purgatory. They ditched the pagan aspect, and made the returning spirits evil. The sharing-with-neighbours part fit too, and became the Harvest Festival.

When the Americas were settled, Irish migrants took the old stories with them. As the USA developed its own culture as a blend of its constituent parts, the Irish merged with the French and Germanic witch and fairy traditions (for example, Oberon is first seen as an antagonist of Charlemagne) and All Hallows Eve became the time to mock the evil spirits by dressing as them. As sugar became a more prevalent product, giving the ‘ghosts’ a piece of sugar cane became easier than beer or milk. Sugar cane became chocolate, became any kind of Treat, to ward off the Tricks of the “fairy folk “.

Now Halloween means hordes of small children begging for candy, and teenagers demanding money in return for not putting fireworks through your door.. I’m not sure I like the evolution, so I celebrate this time of year by sharing the fruits of my labour. Here you go, neighbour! Have a whole lot of thinking.

If your fantasy culture has been around for a while – centuries or millennia – it has likely evolved in a similar fashion. There will be those who keep fast to some version of ‘the old ways’ and some who have applied them in new ways. If a nation has been conquered, colonised or even conquered others, the newcomers bring new customs and new gods, and few conquerors allowed the natives to worship unhindered. Even mundane things like introducing a new crop can reflect in the spiritual life of a people. According to a Papal Bull, capybara are officially fish (despite being rodents) so Catholics can eat them on Fridays.

Think about how the new gods and the old interact. Do you follow the Ice and Fire model of “some worship one set, some the other, mostly they coexist, and that’s fine”

The Roman model of “Zeus? You mean Jupiter. Sulis? Oh, you mean Athena.”

Or even the Mongol model “there are many gods, and yours are ok, as long as you don’t try to convert us”

When languages merge, you get dialects and creoles. When cultures collide, you get history. And what is history but another branch of storytelling?