Write about dragons this month, says the Boss.That’s not as easy as it sounds, because nobody can agree on what we mean by dragons.

The Welsh Dragon has four legs, wings, and a tail. Her diet is unclear, but probably includes invading Seis (Seisneg is Cymric for the English) She stands for bravery and steadfastness, and her element is earth.

The Norse dragon stands on four legs, but tends not to have wings.. Guardian of gold, he represents greed and selfishness. He eats adventurers, and he might breathe fire

The Oriental Dragon is more worm-shaped, and has either four, many, or no legs at all. It might fly, but without wings. It’s element is water.

The Tibetan Dragon is the Thunder god, ancestor of kings, and guardian of mountain top lands. Physically resembling his Chinese neighbour, I can find no ready reference to what he might eat..

Not forgetting the Komodo Dragon, which exists in the mundane world.

Also included in the draconic mantle are wyverns (only two feet and wings), hydras (many headed serpents), wyrms (no or many legs) and probably a whole lot more fantastical beasties depending on who you ask.

Perhaps a better question is why dragons are how they are. They represent to us the power of nature – whether that be the unpredictability of weather; the uncontrollability of fire; or the obnoxious nature of a greedy person – dragons are the ultimate in powerful monster. They might be benevolent – bestowing magic or material wealth – but they are more likely to eat you, as punishment for trying to control things beyond mankind’s ken.

As storytellers, we choose which kind of dragon fits our narrative. Anne McCaffrey chose a telepathic helpmate to help drive back the alien Thread; Weis and Hickman use both the fiery violence of Red and Black dragons and the helpful Metallics; and Tolkien uses the dragons as monsters, undefeatable by might, but perhaps confounded by guile.

I only keep the helpful varieties of dragon about. For example, here is Alfred, who job is to house treats for sharing, with some of his draconic friends. 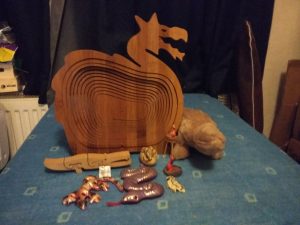