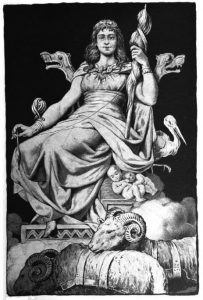 Frigga depicted on her throne by H A Guerber

F is for Freya. Or Frigg. Or possibly Freyr, although he tends to be a masculine counterpart – and possibly Freya’s brother.

She’s the goddess of fertile fields, of fruitful forests, and of love – although rarely invoked in marriage, such legal importance was more generally reserved for Thor. She tends to orchards and forests, but more importantly she weaves and spins – not just weaving mortal fabrics but also altering the weave of the web of fate. This form of magic possibly learnt from The Norns (a trio of giants akin to the classical trio of The Fates) is tied very strongly to femininity – even Odin, the All-father himself, was seen to be sacrificing some of his masculinity in adopting the art when Freya taught it to him – but its usefulness is sufficient that many men were willing to make that sacrifice.

Where does she fit in the family tree? Frigg is the wife of Odin, Freya his daughter [and bride of Odr]. She is usually described as one of the Vana – the earth-spirits who intermarried with the Aesir and provided some of their power. Like so many of these deities – the goddess we think we know is the aggregate of many cults across the Northlands. She’s often depicted as the mother of both Thor and Loki.

Her compassion, and the influence it grants her, is in some ways her greatest source of power – as seen with the two cats, Bygul and Trigul that draw her chariot. As any cat-person knows, it’s near impossible to get cats to wear a leash, never mind a bridle, but these two magical animals willingly do so for Freya as thanks for her care for them.

Story of the God – The Brising Necklace

Frigg was a beautiful, blue-eyed, blond Vana, and was wed to handsome Odr, the sunshine, and bore him sons and daughters. They lived in her palace, Folkvanger, in the land of Asgard. But despite her many virtues, and the grandeur in which she lived, she had a weakness for jewels.

One day, Frigg was out for a walk along the border of her kingdom. This was the boundary of the kingdom of the dwarvish Svart Alvar. As she walked she saw that some of the dwarfs were making a beautiful necklace. It glistened as golden as the bright sun and Freya stopped to admire it. Frigg was told this treasure was the Brisingamen, or the Brising necklace and of great value to the dwarfs.

“Oh, you must sell me the necklace. I will give any treasure of silver or gold for I cannot live without it. I have never seen one as beautiful.”

The dwarfs told her that all the silver and all the gold in the world could not purchase the Brisingamen. Unwilling to leave without owning the necklace, she asked: “Is there any treasure in the world for which you would sell me the necklace?”

“Yes, you must buy it from each of us.” answered the dwarfs, “the only treasure for which we would trade it is your love. If you are wed to each of us for a night, Brisingamen shall be yours.”

Bewitched by the sparkle of the beautiful necklace, she agreed to the pact. No one in Aesir knew about these weddings of barter except the mischief-maker Loki, who seemed to always be around when trouble could be found.

After four nights of these unlawful unions, Frigg returned to her palace feeling shamed. She hid the necklace she had given her honour for, wearing it only in the privacy of her own chamber. But Loki came to Odin in inform him of what had taken place in the land of the dwarfs. Knowing that Loki was prone to deception, Odin demanded proof of this wife’s infidelity. To provide evidence, Loki set out to steal the necklace, but he found that Frigg’s chambers were well sealed against him.

Turning himself into a flea, he flew into Frigg’s chambers intent on grasping the necklace, but he could not remove it without awakening her. Scheming as always, he bit her upon the cheek – causing Freya to turn so he was able to remove the necklace.

Loki went to Odin and showed him the evidence of scandal. Odin tossed the necklace aside, left the kingdom of Asgard, and travelled to Midgard – the adventures he had there are a tale for another day. Frigg woke the next morning to find both her necklace and husband gone.

Weeping, she went to Valhalla to confess to the Aesir. The council of the Aesir, ruling in Odin’s absence, forgave Frigg for her misdeeds, but demanded a penance. Taking the Brisingamen from Loki, they commanded Frigg to wear the necklace for eternity as a reminder of her shame. As she wanders the world she weeps for her lost love. The teardrops which land on soil turn to gold in the rocks, those which fall in the sea are turned to amber.

Freya is the patron of druids and clerics of the ‘actually quite nice” variety. Her strong association with love – especially doomed lovers – means she might be invoked in magics of beauty, but she she might even grant her followers mind control ‘befriending’ powers. Meanwhile her influence over fate, while subtle, may grant the edge needed to ensure that every encounter ends to her follower’s benefit – with unlikely coincidences occurring regularly.

Her temples could be brimming with treasure, or robbed out and now the lair of thieves. Her connection to the svart-alfar – which are not quite Marvel’s Dark Elves, nor Tolkien’s dwarves, but the ancestor of both – suggests that her worship may have attracted crafters and smiths. Who knows what wonders they might have fashioned deep within the earth? Or what cunning traps?

As a Norse deity, she has a warrior aspect, and might actually be the patron of your enemies. In a more blue and orange morality gameworld, she easily might be supporting the opposition. Her fiercer form is suited to witches – both the wiccan and warty kinds. Powerful femininity, using herbs to create potions, spells and curses – that could easily be Warrior-Freya. Cross her – or any adventurer devoted to her – at your peril.

If you are looking for more setting ideas, or ways to tie real myths into your games/stories, check out Jigsaw Fantasy