In fitting with the theme of this week’s post, it’s coming out a few hours late.

Why? Well, this week I want to talk to you about our schedule. First things first:

With that said, one thing might stick out – it’s a week shorter than most kickstarters. There are a number of reasons for that, and I’d like to go through them:

1) A shorter Kickstarter means less slowdown in the middle.
Our previous kickstarters have had less than 20% of their funding happen in the middle two weeks, with only ~5% or so in the middle 7 days. Missing out on that 5% isn’t great, but there’s no guarantee that we will. In fact, by having only 3 weeks the starting rush and the ending jump may run together – as some kickstarter’s have found in the past – and create more hype.

2) Running a Kickstarter is a lot of work and stress.
We already have a lot to do, and marketing etc. for a Kickstarter eat into that time, along with the stress of every day where the backing drops below the prior, and never knowing how much it’ll pick back up in the end. Dropping the middle week cuts that stress significantly – by at least 1/4, but likely closer to 1/3.

3) We want its profit in this tax year. (By April 5th)
We’ve been converting some stock into cash this year by trading at conventions, but we have made very little net profit. For various reasons we’re optimistic of much more income next tax year, and having nothing this year and all of it next is suboptimal, so we want to end this tax year.
Given that we’re not ready to launch this week, a three week Kickstarter is the longest we can fit in.

And last, but certainly not least

4) We have big things planned for later this year.
Clash of Blades, the game I’ve been working on for the last 6 years, is finally ready to launch, with no more nits to pick. But I don’t feel ready to send it out to crowdfunding right now. In all our previous kickstarters something has gone wrong, and we’ve delivered slightly behind schedule. While our Patreon has shown that we can stick to a monthly schedule, we want to do something bigger, with more moving parts and some physical fulfilment, to prove (both to our backers and to ourselves) that we are ready for all the trials involved.
But we also want to launch Clash by the middle of this year – and that means that we have to have the precursor project done and dusted by that point.

In the next week or two we’re going to launch a Kickstarter campaign for our new game. The campaign will fund production costs and artwork. As you can see from the images attached to this post the cards are functional but not spectacular, and we would really like the game to be beautiful. 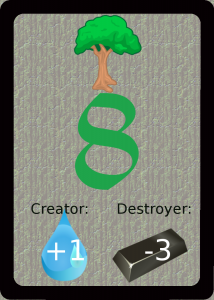 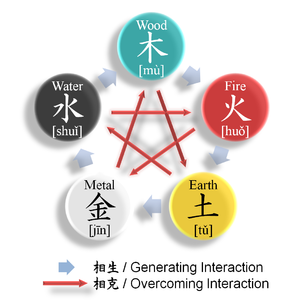 For this week I’ve decided to put out something simple but useful – an index of the various gods in Mythic Mondays in alphabetical order.

And of course, the two special members of the sequence:

Clashing with the Naga Demon

Soon we will be beginning another weekly run – this time of Monstrous Mondays, and just as with Mythic Mondays we’ll be looking at a mix of the well-known and the obscure, from many different cultures. That run may not be uninterrupted – we have plans for a Kickstarter in the midst of it, and may well switch authors – but we’ll eventually have a full alphabet of those two.

Let us know what you think so far, and we’ll see you next week with something else a little different.

P.S. if you’re enjoying this content, consider backing our Patreon as a $1 philanthropist – this series may have been a labour of love on Mam Bach’s part, but we can only afford to work on such things when funds allow – for less than a cup of coffee a month you can help keep that possible. – Ste 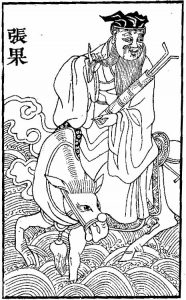 A woodcut of Zhang Guo

One might expect to struggle to find a Z, but if one heads to the Orient, one finds a plethora of deities which we transliterate with a Z.

The Chinese Celestial Bureaucracy has a thousand servants – many of whom are deified humans – so their names resemble those of mortals. From General Zhao Yun, to Emperor Zi Ying, to Philosopher Zheng Xuan  – anyone of sufficient greatness can claim a place in the Jade Court of Heaven.

This proliferation does lead to over specialisation – many new deities are the Tut-ti, whose realm is small – particular villages, streets, or even individual houses. Greater souls (particularly those of Emperors) can govern larger realms – Yu the great, founder of the Xia dynasty is a water deity, and protector of ships at sea.

I’ve chosen a story from the most eccentric of the Eight Immortals of the Taoist pantheon. As usual, I’ve switched about details to read better, and here I’ve introduced an element from a different story.

Story of the Soul

Zhang was a an alchemist experimenter, and a maker of wines.One day, after drinking a little too much of his own stock, he took a walk into the mountains, where he found a delicious looking mushroom. It was as big as his own head, and Zhang took it and ate it all up, licking all the the tasty juices.from his fingers

Now, wandering in mountains whilst drunk is dangerous, and sure enough, Zhang fell. He tumbled down the mountain. He should have died from such a fall, and when he landed at the bottom, he realised he had consumed one of the Mushrooms of Immortality.

With more time to think about everything, Zhang left his experiments. He took to wandering the countryside on a paper donkey, which he had animated by magic. This donkey could take him a thousand miles a day, and needed no food, At the end of the day, Zhang folded his donkey neatly into his pocket

The Emperor, on hearing of the wise teachings of this philosopher, summoned him to Luoyang, to be the chief of the Imperial Academy. The necromancer Ye Fashan, whose opinion was valued at court, came to the Emperor and warned against the appointment.

“Why, who is this Zhang Guolao, that I should not reward his wisdom”

“If I were to reveal the truth to Your Majesty, I would drop down dead of the malice of him” said the cunning necromancer.

“I command you to tell me!” said the Emperor

So the necromancer proclaimed Zhang to be a white bat, spun out of Chaos. And as he had said, such a truth was not for mortal lips, and he fell down dead. The Emperor, being not quite mortal himself, knew that this meant that Zhang was a member of the Celestial Bureaucracy. So the Emperor went to Zhang and begged forgiveness for Ye. And Zhang came to the court, and poured water over Ye’s corpse, which rose to life again.

Soon after, Zhang fell ill and returned to his home on Zhongtiao Mountain. He remained still for three days, and his followers built a tomb for him. But on the anniversary of his seeming death, his tomb was opened for the people to pay homage to him, but the body had gone. No one knows where he went, but there have ever since been stories in that area, of folk who met the great philosopher, and benefited from his wisdom.

In your Games and Stories.

The Jade Court is intensely political, and an ideal backdrop for stories where quid-pro-quo is the order of the day.The various small goods, philosophers and courtiers are all trying to progress through the Hierarchy, and might well trade favours with protagonists. Or antagonists, for that matter.

Because of the profusion of small gods in the Bureaucracy, Zhang is marked as “patron of the elderly”. This tells us something about Chinese society – that they consider the aged to be worth protecting. One has to wonder what other specialists the Jade Court harbours – and what counterparts wander the Thousand Hells.

Zhang isn’t terribly powerful on his own, and is unlikely to feature in shrines or temples. His tomb might be intriguing to explore – how did he pull off the vanishing trick? – but would be unlikely to be full of easily looted treasure. Likewise, as a spell-granter, Zhang is likely to need to borrow from other bureaucrats – so would likely favour a spell of trade. Best example is Empire LRP’s Scales of Ephisis – Put something in the box, receive something of equal value, for a given idea of value.

So that’s twenty-six gods, and a festival. If your clerical character can’t find someone to follow, you’re just going to have to write your own god. Or pantheon. And a world for them to inhabit. We’re hoping to write a book, with just such world-building help – with a bit more anthropological viewpoint, where here we’ve concentration on story-building.

I’ve enjoyed sharing the stories of these gods with you, but now I’m going to hand off the blog to Amy, who plans to provide you with more monsters than you could shake a really big stick at. Do we make monster-shaking sticks, Boss?

Unfortunately not. We do have a nice selection of other items however, along with an ongoing series of worldbuilding works by the name of Jigsaw Fantasy.