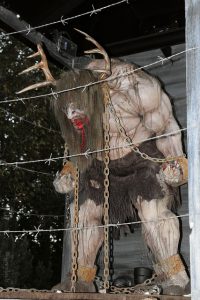 The first time I came across the Wendigo was in “Charmed” which had an interesting take on the concept – combining it rather strongly with werewolves. I have since learnt more about them.

Wendigo are a human eating monster of the Native Americans of the Algonguian tribes, dating from long before europeans ever set foot in their land.

The story tells of how people can be transformed by eating human flesh into a monster that lives only to eat more humans and yet is never full. Some say it is the unthinkable deed of cannibalism that transforms them, while other stories say it is a demon or evil spirit that does so, able to possess those who have engaged in the act. Many of the stories also tell about how they hurts and kills people out on their own in the northern forest but some talk about how it can be hunted and killed – the only way is with fire.

Because of its connection with evil spirits its image is sometimes changed in media to something more demonic, with horns and a ghastly grin.

They tend to look humanoid in both shape and facial features but are sometime depicted with the head of a deer or just the antlers of a deer.

Red or yellow eyes – in more demonic interpretations they may glow.

They have sharp yellow teeth.

Very long arms – as long as their whole body.

Human like hands with long bony fingers and claw-like nails.

They generally have gaunt bodies which can be covered in grey, decaying skin or thick matted hair – with a long bony chest, akin to that seen in an emaciated corpse.

Big long legs with have been depicted as human or the hind legs of a deer.

Feet are normally human with long sharp claws, but they may be hooved – particularly in media where they’re associated with christian demons.

The have superhuman strength, move faster than any human can and are effectively immortal.

p.s. If you enjoy our thoughts on integrating myth and fantasy, check out Jigsaw Fantasy on Kickstarter or Patreon