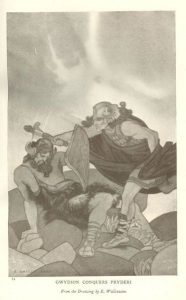 One of the oldest forms of his name is Guidgen which means ‘Born of Trees’, and his historic origins may well have been as a forest deity. The Celts saw their gods as personifications of aspects of nature. After the Christianisation of Ireland and Wales, these spirits of land and water became mischievous fairies.

Like many of the Children of Danu – the main family of Celtic Deities – Gwydion is a magician. His exploits feature in many stories in the Mabinogion, which is also where we meet some of his more famous peers – Gawaine, Taliesin and Arthur.

Story of the God – The Son of Arianrhod

Arianrhod was to become the wife of a great chieftain. As was the custom at that time, she was tested for her virginity, and it turned out that she failed.

“But I lay never with a man, save for a dream I had, that the light itself became a human shape and stayed the night with me” she said.

This was taken as that the Lord of Light, Lleu himself, had slept with her, and that made her no fit wife for the chieftain.

Ashamed, Arianrhod ran to the door, but on her way out something small dropped from her. Gwydion took the token, wrapped it up and placed in a chest at the foot of his bed. Some time later, he heard screams from within the chest, and opened it to discover a baby boy.

Seven years later, Gwydion accompanied the boy to Caer Arianrhod, and presented him to his mother.

“Arianrhod, here is your son”

“If that is my misbegotten child, then I lay a geas on him that only I may name him”

So Gwydion took the child and disguised himself and the boy as cobblers. His skill was such that all the people of the castle came to have their shoes made, and at last Arianrhod came to the courtyard where the two were working. Whilst the elder cobbler wielded the sharp knife on the leather, the bored child threw a stone at a nearby wren. He struck it so accurately that Arianrhod remarked “it is with a skillful hand that the fair-haired one has hit it” and so the boy was named Lleu Llaw Gyffes, which is Fair-haired one with the Skillful Hand.

Furious at having been so tricked, Arianrhod placed another geas on the boy, that only she should arm him.

Gwydion went and borrowed a pack of hounds, and by enchantment caused them to seem as Irish raiders, tall and cruel. He set them on the gates of Caer Arianrhod.

“Woe unto us, that we are beset! Who will drive back the raiders?”

Lleu, disguised this time as one of the serving folk, came to the gate and volunteered to defend the castle “save that I have no arms nor armor”

In desperation, Arianrhod clothed the servant in a fine suit of mail, and gave him a spear and shield. And he went out and single-handedly drove off the pack of hounds. He returned to the castle in his own form, wearing the armor and wielding the weapons his mother had given him.

Seeing that she had been tricked once again.she laid a third geas on him: that he should never have a human wife.

To counteract Arianrhod’s third curse, Gwydion and his brother Math took flowers from each of the forest trees and conjured a maiden from them – Blodeuwedd, meaning Maid of Flowers.

Of course, with no soul, she could not be faithful, and caused nothing but grief. But that is hardly the fault of Gwydion Gwyn, whose part in this tale is done.

Gwydion can appear as his own self, as a guide and teacher of magicians. His magic tends towards the transformative – turning hounds into people, and the illusory – disguising himself. He also, elsewhere in myth, is a master of certamen – the wizard’s shapeshifting duel, chronicled in both “The Sword in the Stone”, by T H White (filmed by Disney) and in the song The Twa Magicians (recorded many times in different ways, for instance Damh the Bard’s recording of “The Two Magicians” which differs greatly from Steeleye Span’s “Two Magicians”)

The Celts didn’t really do temples in the Classical sense, but any place sacred to the Fair Folk could be a portal to their world – either the Underworld, or Fairyland (the Celts didn’t distinguish) Pools and fountains are good for this, as are caves and hollow hills. Even a simple crossroads at midnight on the full moon could become a road to faraway places.

As a god of magic and craft, Gwydion’s name might be invoked by talismongers and smiths alike. His influence might be sought in Ogham, or chanted over a quenching pool, or sung whilst weaving a baldric. As a forest deity, he might especially be patron of carpenters and fletchers – guiding the selection of the proper wood, and used as a meditative focus to carve smoothly.

For a fantasy setting that lets you more easily weave in the gods, try Jigsaw Fantasy