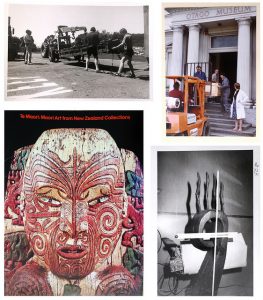 The Te Maori Exhibition, with an image of Uenuku. Click for source.

Uenuku is the Maori god of the rainbow

The Maori word for New Zealand is Aotearoa, which is the Land of the Little White Cloud. Many gods, and the myths we tell about them, are shaped by the environment of the people telling those stories.

Norse myth has the world emerge from ice and fire. Classical myth has the world born from a watery Chaos. For the Polynesian Island people, gods are often either mountains or clouds. If you look at images of the island groups, they appear out of the sea as mountains shrouded in clouds. Some of these gods are grumpy – which is not surprising when you recall that this whole area is volcanically active.

Prior to the arrival of European settlers, the Maori had no written language, so all of their stories were passed down orally. As such there is no canonical version of their stories – modifying the tale to suit the listener is very much in the tradition of these bardic people.

Uenuku had sailed far in his canoe when he saw a magnificent island. He paddled into a convenient bay and drew his canoe onto the beach

“I wonder what the fishing is like here” he mused

And he set lines and caught a large fish, so that he ate very well that day, and he slept in his canoe.

When he got up in the morning, he looked at the sunlight and thought it would be a good day for hunting. So he went upstream, where instead of game, he found a pool where a beautiful girl was washing her hair.

“Come eat with me, pretty girl” said Uenuku. They sat and ate and talked for a while, and then the maiden told Uenuku that she had to leave, but that she would return the next night.

And so he went and slept in his canoe, and returned to the pool, where the maiden was waiting for him.

The pretty girl explained that she was a mist maiden, and she was only free when the mist rose – at night, or early in the morning. And so for some time Uenuku fished the evening tide, and spent his nights with the mist maiden, and they came to fall in love.

She consented to marry on the condition that he not tell anyone about her. So they lived in harmony, each night Mist Maiden would return, and each dawn she would leave. When a little girl was born to them, Uenuku realised that he had been away for a whole year, and that his tribe would likely think him dead. So he resolved to go home for a visit.

When he beached his canoe in his home village, everyone gathered around to welcome him. They had given him up for lost.

When he told them all he had married, the tribe were excited.

“So, you must show us this wife of yours”

“She cannot know that it is dawn if you block up the windows. Then you can bring her her to us, and we will all know your happiness”

Uenuku went home, and to please his tribe, he blocked up the windows. But Mist Maiden knew when the sun rose and escaped through the keyhole, which he had neglected to block.

All alone, Uenuku set out to search for his wife and child. After many years of searching, when Uenuku was bent with age, Rangi the Skyfather took pity on him, and changed him into a rainbow. Now he lives in the sky with his family. But the rainbow does not come down to earth to visit, since the only people he might want to see would be his tribe, and he doesn’t want to visit them anymore.

In your games and Stories

The Maori carved wooden sculptures to house spirits, and Uenuku is housed in a spiral-headed post, which could be carried with the tribe as they migrated from island to island. Perhaps in a more fantasy version of our world, floating temple ships bearing such sculptures ply the seas. They would be likely guarded by tribal warriors, and be a storehouse for the treasure they had accumulated – more likely books than gold. Whilst in our world the Maori relied on oral tradition, in a fantasy world they are just as likely to be literate as any other population.

If any god in this collection were to grant the Befriend spell, Uenuku is a good candidate. He might also make available sensory spells, which he might have developed to help him find his lady-love. Conceivably, he might petition the Skyfather for weather control, but that’s more likely to be a direct appeal.

You might meet Uenuku earlier in his story than his divinity – as a fellow questor. He is the kind of character whom one meets in computer RPGs with an exclamation point above his head – the beginning of story arcs. Perhaps he needs the protagonist’s help, to aid in his search, or perhaps he has seen things in his travels that will help with the current quest.