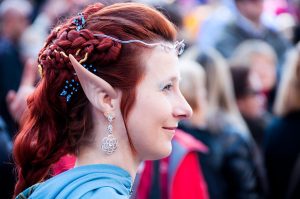 The other mythical source for elves is the Celtic Tuatha De Danaan: since these are usually invisible, this doesn’t help us identify their appearance. When they do choose to appear, they seem indistinguishable from the Celtic lords with whom they interact, during the era in which they are still gods. After the coming of Christianity,.these nature-spirits devolve into fairies. Here are the origins of the Winter and Summer Elves – Lugh becomes Lord of Summer and Morrigan the Lady of Winter. Their appearance tends towards the element of which they are master – so the Lady of Winter has white hair and a crown of icicles. Here the lines blur as to whether they’re elves at all.  At one end of a story-spectrum you have elementals – beings made of an element, who are usually only semi-sentient. At the other you have Tolkien’s elves – which are essentially humans-plus.

So given the diversity of sources, we can mentally draw our elves any way we please; though most fantasy worlds have elves as the peak of human grace, though not particularly strong or tough. For our own gameworld, Twissen – loosely based on 4th ed DnD’s Points of Light setting – we decided that the only way to tell the difference between the Elven races was by carefully studying the eyes – eyes being windows to the soul. We relied heavily on input from the biologist on the team about how such a race could have evolved. While realism isn’t vital, it’s certainly a good jumping off point. We started from “all the elves were one race made by a god long ago” and projected forwards, based on the environment in which they lived – a callback to those Celtic spirits-of-hill-and-vale

So, your eye-color-coded elves are:

So there you go. Varietals of elves, identifiable with a good Spot check, but not quite as racist as the original. Trivial illusion magic, or even a good disguise, allows any elf to masquerade as any other kind of elf, but they still require an ear-bob – or a more extensive illusion – to appear human.

Fire-elves and wind-elves? We went all Arabic, and called them ifrits and djinni. What color are those elements? Handing the ball over to Ste for that next week.