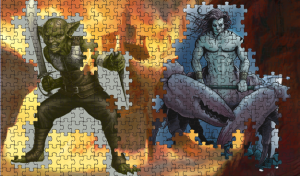 The Jigsaw Link itself suggests that if you’re familiar with Greek myth, you might substitute Poseidon. If your realm has more of a Caribbean feel, you might use the loa Agwe. If you’re in Greyhawk2)When we say Greyhawk, many of the elements are common to Eberron or Forgotten Realms. See what I mean. Meta – footnote!, Procan works just as well.

But what if you’re not playing in any of those settings? The Links are where our setting can touch on other elements. We try to use a broad spread of suggestions, to ensure that every reader will have some that they recognise. This should also be a starting point for thinking about your own worlds; we don’t aim to advocate any particular system or setting – we just give you the examples that seemed to best illustrate what we were thinking.

Don’t let the Jigsaw Links limit you however – while they are key points that you can modify if anything we wrote doesn’t suit you – change it. Make all the desert names Hindi – suddenly the Sivatag Desert moves halfway round the world to India, and becomes the Registaani Lands. Don’t have dwarves in your part of the world? Make the dwarven crafter into a goblin one instead. We don’t mind – it’s your world. Really.

One trick we’ve used time and again when creating Jigsaws is the “flip it and shake” approach. What happens when a traditionally masculine role is made feminine? What happens when you mix two norms from disparate cultures? What happens when you re-jig a society to magic-ise their key feature? In our world, the Amish reject technology.in favour of a simpler life. If we now imagine a culture who rejects magic – what happens when a party including a wizard rolls into town? Suddenly, your warrior has to do all the talking! That’s a whole new place. If something doesn’t work – especially if a character doesn’t quite fit the role you need for them – flip the switches and make them elven / tall / dressed entirely in blue / follower of the God of Thunder / loud / from the protagonists homeland / all of the above. It depends on what role they’re needed for the story.

Take a defining feature and twist it. The LRP world of Maelstrom had a faith where charity – which most real-world faiths have as virtuous – as sinful, denying the recipient the chance to rightfully earn their living. When we do this, we’re not saying that the original is wrong, just that the fantasy world is a little different. All fantasy is a little different, and a little the same.

Somewhere in the world there is someone playing an RP game straight out of the book – but I haven’t met them yet! Every GM, DM, Storyteller, Director or Referee I’ve ever had cause to compare notes with runs a game that’s at least a little bit their own. Isn’t the chance to tell the story our way the reason why we do this crazy hobby?

p.s. Check out the Kickstarter