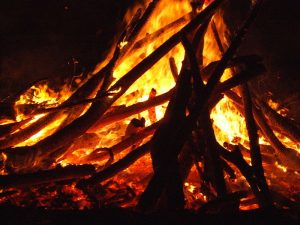 Remember, remember, the death of Kalendra,
Staked, beheaded then burned.
If Kalendra’s beheading was held at a wedding,
T’would be the birth at which she returned.

If you don’t recognise that rhyme then I’ll be quite surprised, but if you recognise the words I’ll be astonished.

Nursery rhymes have a powerful ability to infect the mind – they’re like ancient earworms – but they can also convey significant amounts of information and emotion about the history of their origin.

To illustrate, let’s first look at what the original rhyme would tell us if we were not of this world:

Remember, remember, the fifth of November
Gunpowder, treason and plot.
I see no reason why gunpowder treason
Should ever be forgot.

Well, the fifth of November is clearly a date, and one on which a major event happened. An event that involved gunpowder (the meaning of which will become clear once we discover that guns are a type of explosive crossbow), and treason.

So we have a little idea of what’s going on, but not a huge amount – it’s not a well-structured rhyme for worldbuilding, but it doesn’t need to be. Still, if we want more information we could look at the rest of the poem (which is, in my opinion, much less well composed):

Guy Fawkes, guy, t’was his intent
To blow up king and parliament.
Three score barrels were laid below
To prove old England’s overthrow.

And what shall we do with him?
Burn him!

Now we know that we’re dealing with a monotheistic monarchy (with some sort of parliament supporting the king), that Guy Fawkes is the traitor in question, and that burning someone is a fitting punishment for treason. All portrayed in a much more fun way than just listing it out.

Now for the breakdown of Kalendra’s tale – For this act I’ll go line by line, for by design it’s densely packed.

Remember, remember, the death of Kalendra,

So we start with the fact that Kalendra is someone important who is now dead. Simple enough, but slightly useful for worldbuilding.

Okay, so someone really wanted this Kalendra dead – and from the staking we can guess that vampires are a thing in their world.

Now “hung, drawn and quartered” is a thing in our world, so overkill is entirely plausible as a torture method – but beheading wouldn’t come before burning in that case, as you don’t want them to be actually dead until the third act.

If Kalendra’s beheading was held at a wedding,

An odd image. Obviously it wasn’t held at a wedding, but the fact that it’s something that would be suggested says that just as public executions could be celebrations in our world perhaps they could be combined with other celebrations in this world.

T’would be the birth at which she returned.

This line is the most important one – obviously Kalendra came back after being massively overkilled, but significantly she didn’t do so until after the expected gap between a wedding and the first child.

So Kalendra was not a simple vampire, but if she is a Lich or similar then she is not one that can just pop back up an hour later, but one that must regain her strength – more like Voldemort than Vecna.

Slightly less obvious is what this tells us about weddings within this world: Weddings can work in many different ways in different places, but here it is clear that wedding and birth are intimately linked – and not just in the abstract “married people have kids” sense – either the fertility in this world is quite high, and as such it is to be expected that the first pregnancy will occur within a few months of the marriage, or it is commonplace that people get married during the pregnancy.

Having looked at one example of how a nursery rhyme can inform a world the question becomes how to create rhymes that illustrate what you want them to.

Unless you’re actually a skilled poet you’ll probably want to start with an existing rhyme, as I did, and work from there.

Remember that the existing rhymes have existing emotional connections.

Pick one that you like, and work out what the main aspect you want to convey is (in the case of my rhyme I started with Kalendra as a potent undead) then build the wording around that making sure that everything fits within the world you’re building – and if you have a choice between different ways to go with the rhymes try to pick whichever one doesn’t make sense in our world.