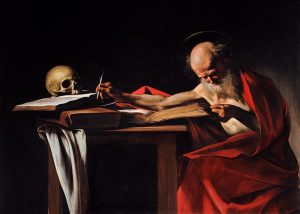 I thought I’d talk a little about how we go about producing the Jigsaw pieces (or whatever they get renamed to, see the post from two weeks ago – while you’re here, if you haven’t already, can you tell us which names you prefer?)

[Ste Note: This article talks primarily about Loz and Ali’s Workflow – next week we’ll talk about mine and Amy’s and about how our differences help improve the pieces.]

It all starts, of course, with an idea. That idea can come from anywhere – something we’ve read, seen, eaten or written can spark an idea, but it then needs refinement. Sometimes that’s a pretty simple affair, other times it can require significantly more time in the shower. We often discuss these ideas with each other (not usually while in the shower) to get them to a point where we can do something with them. I tend to write less and have more notes, while Ali tends to write a lot more at this stage, and keep the notes in her head.

This can be a case of limiting rather than widening an idea. Death Rites started with the idea that much of what we know of ancient cultures comes from their burials (as discovered when sitting round a campfire with a bunch of archaeologists!), so it could be interesting to look at fantasy cultures from a similar viewpoint – but the question then became *which* cultures? About whom would it be most interesting to describe their death rites? Of course many adventurers are buried inside a dragon…

Comments from our backers can feed into this process too – for example the Panoply of Annem Ka took on an Egyptian flavour because someone said they wanted to see things that would fit into an Egyptian, Arabic, or Persian type milieu. It could have just as easily been Mayan or Norse in flavour – or even taken something from Shinto, if the spirits in the items were not those of once-living people.

Then we go away and write a kind of proof of concept – it’s usually the first few pages, and then notes about enough of the rest that it’s believable that it could be completed relatively easily, in the required amount of time, and to the required length. We use Google Docs for this because we can all read and edit the thing at the same time without having to worry about file locks, or working on an old version.

We ask our patrons to vote on which of three pieces they would like to see – each of the three pieces will be in the state described above. Once a piece is selected it’s time to get to work. We have approximately a month to take it from ready to vote to ready to release, and whoever is the named author has the bulk of that pressure – ideally it will be expanded to full length within two weeks.

It’s at that point that the collaborative features of Google Docs come to the fore – the rest of us will read over it and add sarcastic comments, correct typos, rework sections so the grammar is clearer, and question things which aren’t clear. This can be pretty brutal, but we all know it’s going to end up with a better end result so we’re pretty thick skinned about it.

We also look for art. Sometimes pieces will come to mind when writing (most dramatically in the as yet unreleased Dream Monkeys of Antoon, which was inspired by a rather odd trend amongst 17th century Dutch artists of painting monkeys doing human jobs!), other times we will draw from stock art we have bought, or from various free sources such as Wikimedia Commons. These images can require some modification, something Ste has been doing more of recently.

We try to make sure the images (and their captions) expand on the text rather than just illustrate it – for example in the piece named Dragons, (and the freebie excerpt The Dragon and the Convent) a statue has the caption “The statue which Caron crashed into is damaged, but still stands in the main chapel as a reminder.” – this then tells you something about the decoration of the chapel and the sentimentality of the dragon Caron.

Once the first pass has been done, and we have some idea of art, I do the final layout. I have built a template, which includes the basic shape, custom fonts and whatever else. For this I use Libre Office, mostly because I know it well. I looked into other page layout tools and none of them seemed to do anything much better than a custom template on Libre Office does. (In future, Libre Office is going to have a collaborative version, so I may end up running it on a home server and working in that instead of Google Docs, but that’s not stable yet.). This usually takes a couple of passes to get right, especially if we discover at this stage that the piece is too long, too short, has too little or too much art, or the art is unhelpfully distributed – art is never finalised until this stage for that reason.

Eventually we get to the proofreading stage – Generally Ali and Ste will do this, and they don’t always spot the same errors! It’s gone through many eyes already, but typos have an infuriating way of slipping past, so inevitably there will be a few errors that creep through and need fixing after all else is done. Nowadays that’s usually less than ten, but in the early days it was far more and I used to dread having to do significant work on the layout because so many spelling or grammar oddities had changed the flow significantly!

Eventually it gets released to the backers of the Patreon via DrivethruRPG.

Now, this blog post will need to be proofread before it goes up – I wonder how many typos I’ve made…