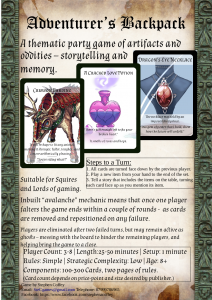 Step Three: Contact Details
There’s no point making an amazing sell-sheet if you don’t provide a way for the publisher to contact you after they read it. At best you’ll find that the idea percolates and they come up with something better that’s inspired by you – more likely they’ll just forget about you and throw the sheet away, mildly irritated.

Step Four: The Hook
In one sentence explain the game – and make it sound cool. Sometimes that means thematics, sometimes pointing to a new mechanic, but it needs to hook them straight away.
I struggle with this, and I never feel my hooks are good enough, but after the fifth revision I take my hands off and accept the best I can do.

Step Five: Visuals
You might not have good art – in fact you probably don’t – but you need to have some form of image to give the reader a break from the wall of text, often an image of your prototype in play. In the case of Adventurer’s Backpack the cards themselves are image heavy, and are the sole focus of the gameplay, so we can zoom on those to show what the game involves.

For art we used a mixture of Creative Commons and Public Domain art alongside stock art from various artists (purchased on DriveThruRPG). If you don’t have good access to art learning to find useable art is a key skill in my opinion. (Quick tip: https://search.creativecommons.org is a goldmine – but it’s not everything, and it’s not infallible, so be sure to double check that you know the true source of the image)

Step Six: Gameplay Specials
In the body of the text you need to pull out the most valuable pieces of unique (or simply rare) gameplay – or whatever combination of elements makes the game something special.

Step Seven: Play Synopsis
Somewhere on the sheet you need to explain what a basic “gameplay loop” of your game looks like – what do you do each round?

And that’s it… aside from the inevitable realisation that you’ve missed something just after you send it out!