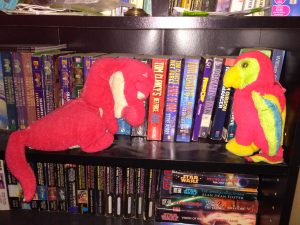 Caption: Ungyzing and Sausage and Chips guarding some books

Everyone has cuddly toys? People still have ones from childhood? It’s not just me? My oldest is a dragon by the name of Ungyzing. I’ve had him for somewhere over thirty years by this point, Sausage And Chips, the parrot next to him in  that picture, is not much younger. Yes, he’s called Sausage And Chips – don’t blame me, that’s what he told me he was called! I had toys who were older (such as Leopardy, the imaginatively names leopard, and The Whale, a knitted… uh… whale, which my mum used to sneak into my and my brothers’ PE kits!), but Ungyzing was the first who was actually mine!

Other than this being somewhat cute, what can you do with this information other than go “awww”? Maybe have a think about dragons. Last week Ali wrote about what we mean by dragons (and introduced you to Alfred, who is also very helpful).

Dragons are supposed to be highly intelligent and independent creatures, so no doubt they have many and varied personalities too. Yet in RPGs and stories they are more often than not arrogant and angry. If they’re not, their personality is mostly determined by the colour of their scales, with only the metallic ones being anything approaching “nice” (ref: D&D). And yet, many dragons in myth are very protective of what they consider “their” – notably the Red Dragon of Wales, who sits proudly on the flag. And as mentioned earlier dragons are wont to claim everything as theirs, so surely they would want to protect everything – at least until it proved uncontrollable.

If a dragon claims the  entire universe as their own then perhaps the only things they would attack on sight are things which are not of this universe – outsider things, daemons, maybe undead depending on your mythology.

Ungyzing, of course, would soundly beat the snot out of Cthulhu!