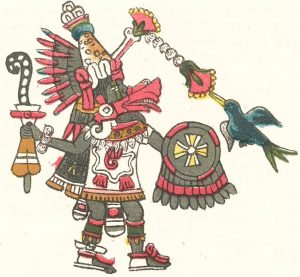 Quetzalcoatl, as depicted in the 16th century Codex Magliabechiano .

The Feathered Serpent is god of the wind and learning. He serves as a messenger between worlds, and as the guide for vision questing.

As with many of the Mesoamerican faiths, Quetzalcoatl is a composite of disparate local gods. Some of his assumed roles are then parcelled out to his close relatives. His twin brother Xolotl takes his role as messenger to its logical conclusion, as a psychopomp – a guide of souls to the afterlife.

Rather a lot of what we know about the Mesoamerican faiths – principally Aztec, Tolmec, and Mayan – is extrapolated from limited archeological evidence. Much useful data was deliberately eradicated by European conquerors.

The latter part of the story is now believed not to actually be Aztec myth, but to be a misinterpretation, written later by European scholars, who were inclined to see the Aztecs as brutal savages. Politeness on the part of the king was, in that society, a show of dominance – think of an extension of ‘cool guys don’t look at explosions’ – or the icy politeness of the classical Bond villain. So in calling Cortez divine, Moctezuma was actually insulting him.

Story – the Herald of the End Times?

When the world was made, the gods needed a great source of energy to power the world. So they made the sun, but it was incomplete. It needed a god to go into it to give it his lifeforce.

There was the First Age, and that sun was the Jaguar Sun Tezcatlipoca

During this age the people were giants, and ate acorns.There was a fight, the sun was damaged and Tezcatlipoca in his rage sent jaguars to kill all the people.

There was the Second Age, and that sun was the Wind Sun Quetzalcoatl

During this age people were made again, in the size they are now. But in one of his rages, Tezcatlipoca turned all the people into monkeys and Quetzalcoatl send a hurricane to blow the monkeys away.

There was the Third Age, and that sun was the Rain Sun Tlaloc

During this age they tried again to make people. But the king stole Tlaloc’s wife, and in his grief Tlaloc refused to send the rain, and drought killed most of the people.

There was the Fourth Age, and that sun was the Water Sun Calchi

During this age, Tlaloc’s sister tried to be the sun, but she was too heavy, being gravid with many children. So the sun fell out of the sky, and flooded the earth, and most of the people died.

And there was the Fifth Sun, which is the sun we now have. This is the shy god Nanahuatzin. He nearly didn’t become the sun, but his naughty brother Tecuciztecatl pushed him, and fell after him, and got badly scorched. Now he lives in the moon, still burning, and nursing his burns.

At the beginning of the Fifth Age, Quetzalcoatl chased the demon Huitzilopochtli away into the sky, with the promise that he would return to aid his people when he was needed.

And the sign of the ending of the Fifth Age was the return of Quetzalcoatl, not in his form as a feathered serpent, but in the form of a man with pale skin. In the meanwhile, the people should do all they could to sustain the Sun in his great labours. In particular, they should cover their great places in gold to reflect the sun’s light further, and they should sacrifice lives to sustain the sun in his work.

The city of Tenochtitlan had been successful in its wars, and had sacrificed many enemy warriors to strengthen the sun, and their gold was taken and clothed the city, and the king, and the priests.

And one of the warriors was scouting in the forest, and he saw in the distance a group of half-men half deer – or so he believed them to be. We know that the men were Spanish, and riding horses, and that their leader was called Cortez. And the warrior brought the pale man to the king Moctezuma.

The Aztec people welcomed the Spanish, thinking that they were the people of their god. The Spanish explained that the Aztecs. So the king set his scholars to work to learn the language of the god people. The scholars soon gained understanding of the meaning of the Spanish demands.

And when the Spanish asked for gold to be brought, a mighty pile of the precious metal was assembled in front of the Temple of the Sun. What more natural than that the god’s people would require his substance in the world?

In celebration of the return of the god, Moctezuma held a great sacrifice. But the Spanish, not realising the importance of sustaining the sun, slaughtered the Aztec people and priests and lastly the king, butchering him on the top of the temple.

And the Spanish took the gold and sailed away, leaving behind them the ruins of the city Tenochtitlan. We call the place Mexico now, but there can still be seen the site of one of the greatest misunderstandings of all time.

The mythical city of El Dorado, the bustling metropolis of Tenochtitlan – temples to the Aztec gods were vast and grandiloquent. Whilst not literally built of gold (it’s too soft) they would likely be gilded and filled with treasures. Exploring them could be either whilst they were operational – in which case be careful not to be caught and offered as a sacrifice, or as ruins – anyone for Indiana Jones?

The other thing the Aztecs are renowned for is their ball game. They used it as a means of selecting the best of their warriors to sacrifice, but it could equally be a war-substitute, or a selection for some dangerous mission. Are the gods invoked in the arena, or is the one place they cannot influence – and why?

Quetzalcoatl as a patron could grant all kind of sensory spells, from darkvision or echolocation, to clairvoyance, to vision questing. He is likely to be worshipped by mystical scholars – particularly those of the Things Man Was Not Meant To Wot variety.

An interesting set of adventures could be set in the times of one of the other Suns. What are the people like? Could you save them from their catastrophe  – and should you?