But we feel that Concept Cards offer something uniquely valuable, which is why we make them. So I’d like to take today’s post to explain a few of the things that make Concept Cards special.

Everyone knows that tabletop roleplayers tend to prefer physical tools to digital ones, but it’s not always obvious why.

I’ve been talking this month about the Modern Range of Concept Cards – but the original ones do still exist, and are still available – indeed they’re slightly more available now as we’ve done some reorganisation.

If you’re interested in them, but unsure, you can check out a sampler deck (with 54 cards) for free.

If that whets your appetite, then you can pick up the full decks digitally on DriveThruRPG or physically on BackerKit. We’ll also be listed soon on Apprentice Games

Be well, and enjoy the Sampler

This month’s freebie is from Jigsaw Fantasy. It’s a short piece, as we’ve not yet decided how much to release and we’d rather grow over time than shrink, but it’s an interesting and versatile one, looking at a desert-dwelling beast to use in your games. 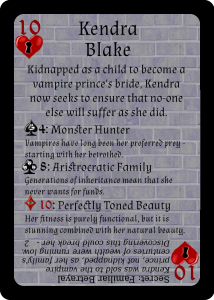 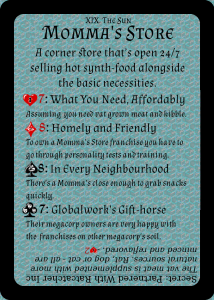 A deck of modern day Creatures would likely interest no-one, there are only so many different dogs, cats, rats and rabbits one can write about interestingly – and I don’t think we could manage 56.

A deck of modern day Treasures would be odd – modern day campaigns rarely focus on the kind of treasure-gathering adventures often seen in medieval fantasy – but it could be done, and would see some use, with items such as laptops with hidden partitions, diamonds hidden in a matchbox, fake IDs, and suchlike. Still, the expansion sections (Urban Fantasy, Superheroes and Cyberpunk) could all do interesting items, so it might well be worth considering doing in a slightly different split than we have planned for the characters – avoiding the base Modern Day deck entirely.

A deck of Modern Plots would work fine; jobs, heists, assassinations, political events, etc. it would likely be very useful, just as our fantasy Plot Hooks deck is. But it’s also a very hard deck for us to write – we struggled greatly in writing Plot Hooks – and while the end product is probably worth it we’d need to be absolutely certain we were both prepared and had a significant market before we considered going through that again.

Of the fantasy decks that leaves Locations – the first port of call after Characters because they’re something we so often create for our own games and we can fit so much plot potential within such a deck. But somehow when looking at both Modern Locations and Superhero Locations we found that there was something off about them – in most cases only one suit was truly interesting. Clubs as danger sits badly in the Modern Day decks, outside of the subgenres and wartime the modern world is mostly safe – diamonds as wealth worked okay, but it feels flat – spades as structure was too often simply another standard building – hearts  was where all the interest lay, the inhabitants of the location, who they worked for and with.

So we talked it over and decided that we were looking at things wrong. For medieval fantasy locations are a key feature of the tale as you travel from place to place encountering difficulties along the way – but in modern stories they’re not that important, they’re more like the backdrop. For the second set of Modern Decks we’re looking at focusing on that one suit in locations that mattered – the hearts – and doing a deck of…

As a new deck type this required some significant discussion, but we think we’ve worked out how Organisations will work.

So come back next week to see the structure of an example Character and Organisation from the modern deck – the formatting will be far from final, but we’d certainly appreciate your feedback.

We’ve done 11 different decks of Concept Cards over the past 6 years, but they’ve all been aimed at the Medieval Fantasy genre of roleplaying. During those projects we’ve had calls for a number of different genres of spinoff, most commonly:

The set we’re working on right now, Modern Day, isn’t named on that list, but it is there: both the Superheroes and Urban Fantasy genres are essentially “Modern Day+” – and digging a little deeper Cyberpunk is very similar to modern day too.

So what we’re planning on doing is rolling the ideas together by making a core of Modern Day decks, and then expansions for Cyberpunk, Urban Fantasy and Superheroes specific elements, due to the way those spin off from the centre in different directions

The exact structure of the Kickstarters is somewhat in the air at the moment, likely to be locked down over the next few weeks, but we’re intending to limit ourselves to three decks per project – four, as we did in our last project, is simply too much to allow for a sensible delivery schedule.

That means that we’ll be doing Stretch Goals a little differently – rather than effecting the current project, Stretch Goals will be mostly about what we’re doing *next*.

Unfortunately I’m in poor health this week so I don’t have the energy to write much more, so I’ll be back to talk some more about Modern Concept Cards next week