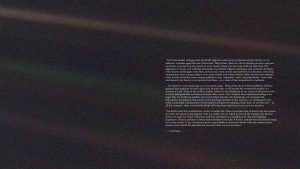 “Space is big. You just won’t believe how vastly, hugely, mind-bogglingly big it is. I mean, you may think it’s a long way down the road to the chemist’s, but that’s just peanuts to space.”

― Douglas Adams, The Hitchhiker’s Guide to the Galaxy

No, really, space IS big. Most fantasy games cover a kingdom, or even a whole world. Scifi adventures cover whole galaxies – maybe even the Universe. Throw in time travel as well, and that’s a lot to fill. Ever wonder why there’s a maximum of half a dozen locations on any given planet?

Because no author, filmmaker or designer can actually portray space as big as it is, and still have something we can relate to. So you get ‘this week’s planet is a jungle’ “this civilisation is Ancient Greece, but IIIIN SPAACE!”

As GMs, we have to walk a tightrope between not enough detail and too much. We have to include enough from the canon to make it the setting we chose to play in, while writing enough new to make the story our own.

Think for a minute about Star Wars. The middle unstated bit of the original trilogy – after Yavin, before Hoth. Vader hunts down the Resistance because they are a problem. So there are stories to be told elsewhere about other groups of intrepid resistance fighters getting up the Empire’s nose, enough that the Rebellion as a whole is more than just Luke, Leia, Wedge and a handful of extras. But because we’re playing Star Wars, we probably need to visit Tatooine and Hoth and Bespin and Coruscant – otherwise we could be anywhere (The problem of who gets to be the Jedi is a different argument, which I am not getting involved with) But we also need new places, not specified in the book. Places that aren’t in the films, because we were there – and if my personal experience of playing Star Wars is in any way indicative, probably blew up / made uninhabitable / sent to the Dark Side / set up franchises on  – whichever seemed most destructive.at the time.

In order to tell fun stories, the GM needs a whole pile of people to meet, shoot at, betray, fall in love with, and rescue. Planets we can freely visit, come from or devastate. Locations to rob, blow up, control or maybe even just occasionally walk away from. (does anyone spot a theme to my scifi games?) So, we here at Artemis are writing a whole bunch of concepts for you to wrangle into your games.

Unlike the fantasy cards, every card is likely going to need tweaking to fit the setting you play in. Take Lt. Commander Martinn Jarvi. He’s an Imperial Officer, young for his rank,  who believes in absolute galactic order, knows all the right people to get ahead, and has a remarkably quiet voice. He’s even prepared to sacrifice lives for the greater good. 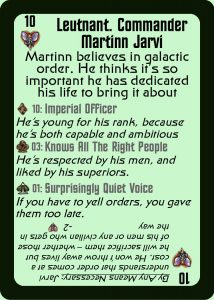 A card of generation alpha-0.2 – come back soon for a more polished version.

In Star Wars, depending on when you play, he might be a Republic official, a Death Star officer, or a New Order officer. Other than that he can be pretty much dropped in as is.

For Star Trek, he almost certainly works for the Federation, but the liberal attitudes of that organisation don’t really fit him. Make him a Vulcan, however, and the desire for order and logic becomes much more explicable.

In Warhammer 40k, he could be an officer in the Imperial Navy, but he makes a much better impact as a Space Marine, stamping out heresy and rebellion. He’s a good fit for an Ultramarine, but he has to be demoted to Sergeant to fit the much smaller deployment model the Marines have. The quiet voice becomes firmer, and his physical description becomes more about his transhuman anatomy than “probably blond hair and blue eyes” He could also be an Inquisitor, where his stamping on everyone ‘just to make sure’ makes him a suitably fanatical antagonist.

Likewise other settings will need him to morph to reasonably exist. Some internal locations make more sense on planets than on space stations, or vice versa  – perhaps the mine is on a nearby asteroid, and the ore is processed on the space station? We’re trying to make as few as possible that couldn’t exist on DS 9 or Babylon 5 – you might never have seen the Water Processing Plant, but logically there probably is one. And your contact wants to meet there – why?

Stories work because we, the protagonists, go to interesting places and meet fascinating people. And not always kill them. Unless they wear black hats. Morality in gaming? That’s a whole ‘nother question for a whole ‘nother day.