We are – we’ve just increased the size of the Zine by 12% without adding a single extra page.

With our experience of printing on playing cards and small leaflets in our previous projects we’ve become well aware of the cost of wide borders, and the dangers of small ones – just how important it is to get them as small as possible and no smaller.

Shards is our first major case of printed long-form text, and we’ve therefore been playing with the borders for a while now, working out what size they can be – but we missed one major factor that more experienced book-printers would have spotted immediately: The three outside borders and the inside border should not be the same size. We’d been working with them equal, and that was costing us a lot of space as it means the borders had to be a whole 6mm (quarter of an inch) wider. That’s a 4% increase of the usable height, and 3% on the width.

But Wait, There’s More: We’ve also tested decreasing the font size from its past 12pt to a smaller 11.5pt text, on the upper end of what paperback books use – it’s still thoroughly readable for even low-quality eyes, but it saves another 8%, letting us fit in even more content.

We knew from the start that we wanted the text bigger and clearer than on our past Concept Cards projects – their space requirements were far tighter – but we overshot what was necessary. Partly this is due to our first test print being done on a printer with a slight misalignment – the text blurred in a way that made it slightly harder to read at small sizes – which has now been corrected.

And Another Thing: We’ve settled on cream paper stock for the zine. We had been considering “Natural” paper, the kind that many older novels used – as it is nicely yellow, and a little more environmentally friendly. However we decided to do a test run on that paper type, and were reminded that the nice yellow tint of a good book takes about a year to really kick in – and we’re not going to be using tea to artificially age the Zine…

Let me leave you with a final thought: There’s one week left on this Kickstarter – so now’s the time to back before you miss out!

With the changing numbers of pages we’ve been doing a bit of shuffling around, but we’ve worked out which of the pieces we’ve got written will be going in the first issue – and which are getting pushed back to issues 2 and 3.

So here’s the contents section – page numbers are not included, as art and typesetting may shift some things; or a “People’s Hero” backer might increase the size of the Zine still further.

Editorial: Introducing the authors and the concept of the Zine

The Grand Labyrinth: The world’s largest maze, which hosts three or four exits: The three below and potentially the more mysterious Hero’s Gate, if combining with Issue #2s Labyrinth of Time

↳   The Wayfarer’s Gate: At the northwest of the maze is an exit best reached through days of painstaking progress

↳   The Warrior’s Gate: At the northeast of the maze is an exit which can only be reached by battling mechanical beasts

↳   The Adventurer’s Gate: At the center of the maze is the most challenging exit to reach, one that will take cunning, combat skill and endurance combined.

Bokort’s Bar: A future tavern with alien patrons and bartenders, alongside some technological gambling games.

↳   Hooks: Example ways to weave the location into a story as well as a world.

The Great And The Wise: Neasa Aranrhod: A fey queen with an interest in answering questions “helpfully”.

↳   In Other Genres: Exploring how to alter Neasa to fit in worlds beyond traditional fantasy

Using the 5 Ws in Worldbuilding: An introductory article looking at how to dig deeper into an aspect of your world by asking the standard questions: “Who?”, “What?”, “Where?”, “When?”, “Why?” and the honorary sixth w “How?” – using one of our past creations to illustrate the method.

Magpie’s Nest: Stealing Thieves: Some things you can take from history, mythology, folklore and fiction to craft your worlds thieves, and their gods.

Letter Lich: In this issue, she answers a questioner asking how to incorporate Drow into a roleplaying campaign without causing trouble for an arachnophobic player.

Credits & Thanks: Art credits along with thanks to our biggest backers and supporters in this project. 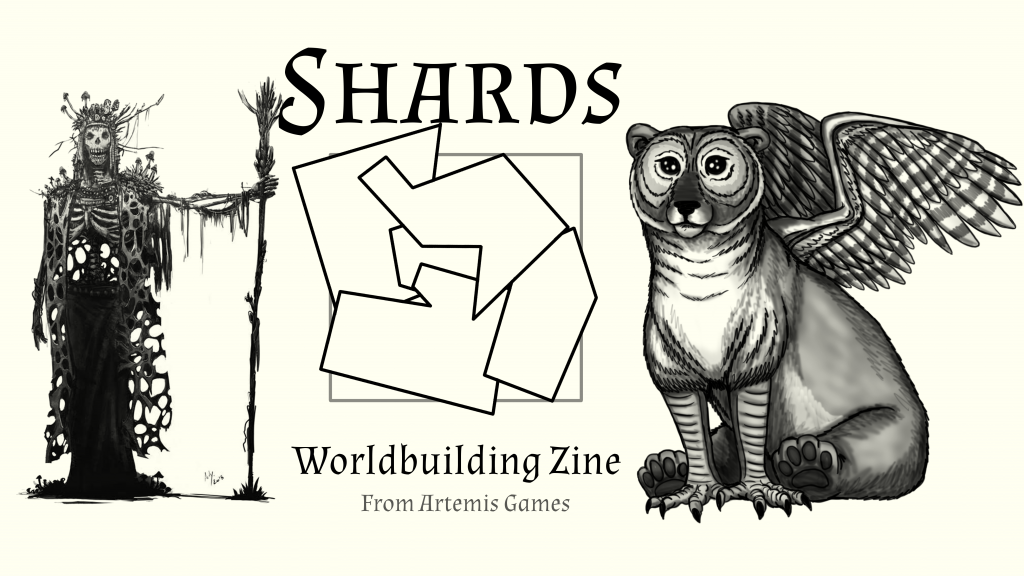 Launching in precisely 24 hours, 4pm on the 12th of February UK time, Shards will be us trialing a lot of new things – including an unusually philanthropic replacement for stretch goals. Take a look and let us know any questions you have. 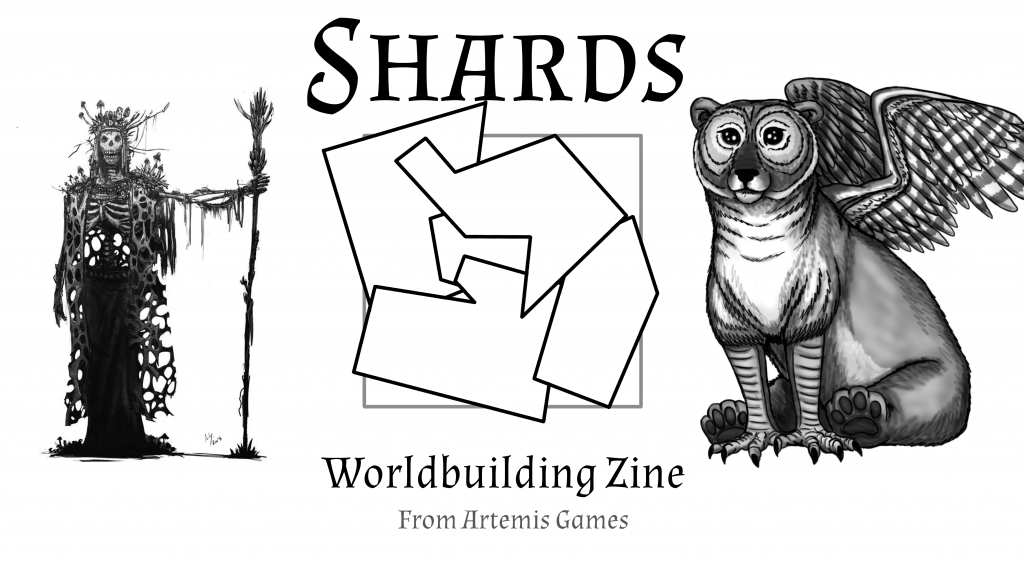 We now have a date for Shards launch – the 12th of this month. It comes with a set, and appropriate, end date – the 4th of March “GM’s Day”.

We’ll be doing 6 issues over the next 6 months, each with three shards of setting – at least one being sci-fi and one being fantasy – a fourth article on worldbuilding, and a letters section where our resident agony aunt The Letter Lich can help you solve your worldbuilding and game-running problems.

Each issue is a minimum of 36 pages long, but there’s also going to be a high-roller backer level that allows the backer to fund 4 additional pages for every copy of the zine, for all six issues; because sometimes it feels good to give!

We’re currently finalising the writing and art for issue #1, and will be launching with those in the bag and at least half of May and June’s articles already written – insuring against any future schedule slips.

Some of you have seen our other worldbuilding lines, through Kickstarter, Patreon, and DrivethruRPG, and are eagerly awaiting the next installment. Some of you have been shared this and don’t know what to make of us. Hi, we’re kinda story architects [Ste: I prefer story scaffolding specialists]. We help people tell stories.

So, I’ve run roleplay games for a couple of decades,  – actually I prefer the term ‘storytelling games’ as it’s a better fit for the kind of games I run. Or possibly ‘movies in your head’ – I often use a vocabulary in common with film students – “In last weeks exciting episode….” Time for a Training Montage! And so on.

When we (my regular gaming group) sat down to talk shop, we realised we have all run up against a recurring problem. When I run a published module, chances are everyone in the game has read it, heard war stories about it, (and it turns out that the seeming safe path is illusion and there’s actually a plank down the middle of the room! Ha Ha!)  or at the very least can look up a lot of the details on the Net. This makes for un-fun gameplay – the surprises aren’t, the doublecross fails when the party shoot the key NPC just to see what happens. The rest of the team have encountered similar with regards to published settings – it’s entirely possible that one of your players knows the setting better than you do.

The trick we all independently came up with is to use the same basic shape but give it a new twist. Perhaps the teacher is a nurse instead? Maybe the boss-fight-at-the-end is in a hospital instead of a back alley? The problem with this is is takes a lot more prep time than playing straight out of the book.

What we write is story elements and worldbuilding advice – so you can more easily mix it up a bit. Either plug our elements into existing settings as a quick twist – or tack a few together and make your own world.

Writers and storytellers too can make use of our pieces as prompts. Explore a character’s backstory; chronicle a location; begin on a planet. Almost everything we publish implies more is going on – we specifically don’t tie down elements like how magic works or what alien races exist. If you make use of a story-seed like this and write something, we’d love a copy. If you make a million, buy us a coffee or something.

We wanted a word that implied disconnected pieces of a whole. Jigsaw didn’t work, as it implied more of a solid final setting. So we ran through a number of idea – fragments, modules, [scratched off pretty quickly due to the “adventure module” implication] capsules, chapters, even “world clay”.

As for why we ended up with Shards in particular? Blame the members of VAGUE – that’s the Manchester Metropolitan University Tabletop Gaming Society. We wandered along one week with a list of names, and asked anyone who would talk to us which ones they liked. I think marketers call it a focus group. We call it talking to your mates.

We’ve been kinda looking for a new way to do what we do best – make world pieces. We’ve made a lot of Concept Cards, and Jigsaw Fantasy was taking all our time for virtually no money. I’m sorry, terribly mercenary of us, but we got rent to find and bills to pay.

Honestly, we probably wouldn’t have thought of presenting in this way without KS doing their Zine Quest. But it does fit the criteria we’ve been looking for – not too expensive to print (we’re banking on you wanting to read it because it’s useful, not because it’s shiny), regular (see Douglas Adams’ wise words on deadlines) and managed – we can stop trying to be sales reps and get on with making new cool stuff for you to play with.