On Wednesday Loz mentioned that we were going to be releasing some more of our Stretch Goals after we had a chance to triple check the details – and here they are:

Black borders are traditional on cards – but that’s partly because of printing technology, which has improved over time. On a larger run it’s perfectly affordable for us to add some detail to those borders, allowing the starfield effect to slowly fade out, creating a slightly deeper feel to the cards

It’s a little over double where we currently stand – and is at the top end of where Kicktraq’s projections put us – but we have confidence that it will be reached.

While far from vital, it’s an improvement we would certainly like the opportunity to implement – we just need the funds to pay the artists.

The First of our Sky-Pie goals, and the only one we’re announcing for now, is making the deck up to 64 cards – 16 of each suit, for a total of 2^6. The new cards are currently planned to be a full suite of jokers (one per suit, rather than just red and black) along with a Pilot and an Admiral for each of the suits – but the precise names are not set in stone, so let us know if you would prefer different bonus cards.

We’re not marketers – we’re writers. So we want to harness your desire for our writing in order to gain the power of connections!

If the Kickstarter page is shared a total of 56 times on social media (we’ll be watching Facebook and Twitter, but let us know about others) in non-spam contexts, we’ll give every backer access to a 10 page piece detailing one specific solar system – with four inhabited worlds split between two very different species.

We picked 56, because we’re pretty sure that’s how many cards the deck will have when this goal is reached!

Simple enough – the solar system gets more detailed, with more information about the culture on each planet, and some of the individual people living there.

Add-Ons During the Kickstarter

You can increase your pledge for more decks of the sci fi cards at the same cost as the backer levels – that is:

Assuming we reach the social stretch goals for the Solar System Setting Shard mentioned in the previous update you will be able to add that too – you will automatically get the PDF, but you may want a printed version. The cost depends in part on the printing costs which we are investigating – the simplest option would be to use something like DrivethruRPG’s Print On Demand service. Once we reach that point we will, of course, announce that.

We are using Backerkit again as it seems to have worked well for us in the past. This means you will able to adjust your pledge at that stage too. You will be able to grab the above options then, but if you do so before the end of the kickstarter we are more likely to reach our stretch goals and you will get more!

You will also be able to add the fantasy cards at that point, too. We are not making them available as an add-on at this stage because we want to keep things focused on the current project – not least so we have a better idea of how many sci fi decks we need to order, and know we can afford to do so.

The cards will be available in various retail locations. We have a retailer level (Generation Ship), and of course will let you know who they are so you can point your friends at them. If you know any games stores who would be interested in carrying our cards please point them at the Kickstarter.

If you’re anything like me you have dozens of characters, ideas for games and general strangeness floating around in your brain (That’s probably why I write them on cards…). Today I’d like to relay a couple of them to you, and ask what’s the strangest character you’ve come up with, whether you actually played them or not?

We were about to start a superheroes-in-space campaign and Ali had a character worked out mechanically, but didn’t have a name. The character was a space ship brought to life by a hyperspace accident. As a space ship she needed a name that was suitable, so I put TBD (for To Be Determined”) and some random numbers. Weirdly she liked it and stuck with it, only adding the diminutive “Teebee” as the character was incredibly inquisitive and eternally upbeat and optimistic.

As the original crew were smugglers, and the contract between them stated that the payout for their current cargo would be split between the crew, and as the rest of them had died in the hyperspace accident that brought Teebee to life, she determined she deserved the money. These funds were then used to buy a near-indestructible humanoid robotic body from aliens, only to discover shortly after purchase that the body was stolen!

That character inspired this card

A long time ago we were going to play a Star Wars campaign. It never got off the ground for a variety of reasons, but we did propose the least comprehensible party ever – three Wookies and an R2 unit! This was back in the days of the West End Games system, which stated that if you played a character who could not speak common were only allowed to speak in character in imitations of the noises that character could make. This would result in the Wookies’ players only ever saying “Worraaagh” and the R2 unit’s player only ever making bleeping noises. As the GM didn’t speak either Shiriwook or Binary that would have made life difficult to say the least.

Probably for the best those characters never got played!

So, share with us your weirdest characters – especially ones you could never actually play but are cool ideas none the less!

The main suit of each card defines it, or is what you notice first, while the numbers represent how strong it is.

Hearts Represents Desires:
Maybe they want to travel the universe or rid the galaxy of aliens.

Spades are Physical Descriptions:
They be very small or bright green and cybernetically enhanced

Clubs are Connections:
Politicians or teachers are people who know people.

The Secret: Every card has a twist. A hidden mutation or a shady past with space pirates might go here. And it can modify the others.

Spades Mean Physical Features
If it is decorated with star charts or really noisy it will say here.

Clubs Represent Dangers
From robust safety measures to death by exposure to vacuum.

Diamonds are Resources
The value within may be gold and jewels, or hidden knowledge.

Hearts Show Inhabitants
You could find the medical officer or a smuggler with a heart of gold.

The Secret: Every card has a twist. An alien hunter lurking in the shadows or impending staff walkout. And it can modify the others.

Clubs Show Politics
A weak leader clinging to power or the beating heart of a star empire.

Hearts are Inhabitants
Scientists studying local plants or a teeming metropolis of billions.

Spades Represent Environments
There could be methane snow, or fourteen moons and two suns.

The Secret: Every card has a twist. Hallucinogenic plants or long lost alien cities can appear unexpectedly. And it can modify the others. 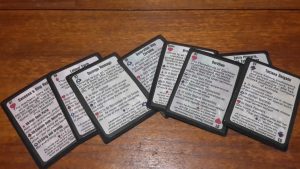 The Art is In

We delayed Science Fiction Concept Cards because we knew the art would be arriving late – due to illness on the part of the artists we were working with.

Fortunately despite the current freezing weather, the art we required has come in; meaning that we can plan a launch date – and as the title says we have picked the 13th of March 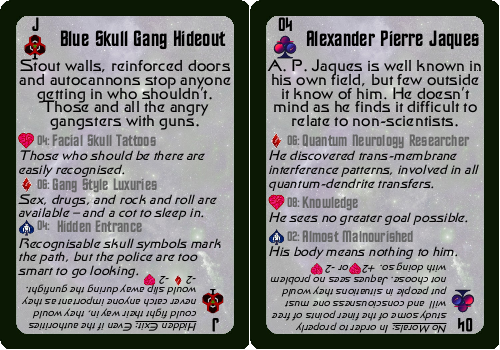 We are of course looking to further polish these symbols, and any comments on likes and dislikes are appreciated. Let us know on Facebook.