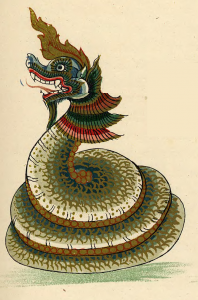 Most creatives know that November is National Novel Writing Month1)Which is rather misnamed, given its international involvement (NaNoWriMo) – but relatively few know of its younger brother: National Game Design Month, or NaGaDeMon

I’ve decided that a good time to talk about the pair is right at the center of the month2)Or a few weeks before the start of the month, but my time machine is out of fuel. so that’s when this is going out.

But first, as this blog has mainly been home to our Mythic Mondays posts I should give a little irrelevant context3)If you want to skip it, simply go down to the next footnote along:

N is for Naga

Naga are a category of powerful beings in a variety of Indian and south asian mythology and folklores. Spread over such a wide area, the tales of Naga come in many forms, with only one definitive trait – their serpentine nature.

Though Naga are often depicted as evil, or even demonic, this is far from universally true as many Naga’s actions veer towards the helpful – whether they are many-headed water guardians or malevolent shapeshifting serpents they are universally both powerful and dangerous, imbued with strength and venom.

Tale of a Naga – Samudra Manthan

Indra, King of all Deva, was riding upon his elephant when he happened across the great sage Durvasa Muni. Out of respect for Indra’s position the sage offered him a gift, a special garland that had once belonged to Great Shiva.

Indra knew that he was considered an arrogant god, and so he decided that he would not immediately wear this great gift, but instead he set it aside upon his elephant’s tusk. His elephant, Airavata, saw that Indra wished to prove himself humble, but he knew that that humility was false – and so he took the garland from his tusk and threw it upon the ground.

Durvasa was enraged that Indra had allowed such a thing to happen to a religious offering, and so he cursed Indra and all of the Deva to weakness and frailty. Due to this curse, the Asura (the Devas age-old enemies) were able to overcome the Deva’s defences, and conquer their realms.

In desperation the Deva went to Vishnu and requested his aid. He offered them an opportunity to acquire the Nectar of Immortality, while overcoming their hated foes, and they eagerly agreed.

In order to obtain the Nectar of Immortality they had to churn the Ocean of Milk that lay at the pole star, and this would require two great armies to achieve. But first they would require tools to do so.

As a churning stick they used a mountain, but to turn this mountain they needed a great rope – and following Vishnu’s advice they asked Shiva for his necklace. This necklace was Vasuki, one of the three Kings of the Naga, and possessed of a great gem embedded within his head.

As Vishnu had foreseen the Asura insisted on standing at the head of Vasuki where they could be close to the glittering gem, while the Deva followed his advice and took hold of the Naga’s tail. As they churned the ocean, Vasuki began to exhale sharply, and from his mouth came the most virulent poison in all of creation.

The Nectar had only begun to form when the Asura collapsed, overcome by the venom – but as the Deva began their collecting they soon found that they too were being overcome. Indra, realising that his people were now in even graver danger, rushed to Shiva and asked for his aid.

Though he knew how destructive the venom was, and that it could kill even gods themselves, Shiva chose to inhale it all to protect the rest of creation. Only the intervention of his wife Parvati saved Shiva from death, by preventing him from swallowing the poison. Instead, the poison sat in his throat, eating away at it until his throat turned blue.

Back to Games and Stories

With our little diversion concluded, I’d like to get back to the topic at hand – NaGaDeMon.4)If you are skipping the story, click the up arrow by this footnote

At Artemis Games we’re generally somewhat perfectionist about our products, and as such we have no real intention of making a full-fledged game in a month – we’re just plain not good enough to meet our own standards that quickly without just reskinning someone else’s work.5)While we have made games that quickly for Concept Cards they were mostly variants of standard playing card games – fun extras, but not something we’d have been happy releasing as a standalone game.

But that’s not to say we aren’t participating – neither NaNoWriMo nor NaGaDeMon are about making a complete final product from scratch, they’re about getting things a few stages forward.

This month me and Loz are each focusing on a different project. I have brought Clash of Blades back, written up its rules in full, and intend to have the first two base decks ready by the end of the month.

Meanwhile Loz has taken on a rather different project, currently codenamed Clash of Brains6)It originated from someone mishearing Clash of Blades, a semi-cooperative game in which the players are psychics surviving in a zombie-infested college, each with their own bonus objectives but all seeking to put down the apocalypse before their precious (and powerful) brains become more Zombie-Chow.

We’re nearing a thousand words, so I’m going to call it here, but I’ll be back with more information on both projects when they’re further along.