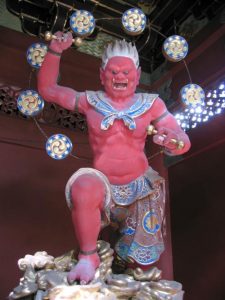 R is for Rajin – or as you probably know him, Raiden.

Japanese god of thunder and lightning, he is one of the children of the divine pair Izanami and Izanagi, who birthed many gods, and the eight original islands of Japan. He carries drums from which he conjures lightning, and his more human form is of an old monk with a straw hat

Japanese parents sometimes warn their children to guard their bellybuttons from this god. Apparently he likes to eat them, although this is more likely a characteristic of his demon counterpart, Rajiu, who appears as a wolf or fox.

Japan has a weird relationship between the spirits of Shinto – in which faith everything has some kind of animus, called a kami – and the later Buddhism – in which even demons can find enlightenment. Rajin has an important job, issued by Siddartha (‘the’ Buddha, or more accurately the first Enlightened One) – guarding the Dharma – a collection of poems, parables and discourses, which comprises one of the major holy texts of Buddhism. How effective is the lightning god as such a guardian? Well, the texts haven’t been lost yet…

Raiden turns up in all kinds of pop culture – dozens of cameos in video games, animes, even in a female form in Joss Whedon’s Angel – but he’s probably best known for his starring role in the Mortal Kombat series. Again, this week’s story isn’t original myth, but has its roots in the mythical character, with a lot of influences from pop culture images.

Story of the God

Raiden sat in the centre of the Todai-ji temple, straw hat pulled far over his eyes. However much he meditated, he could not change the truth. And he could not see a way forward.

The Lord of Outworld had stolen the Dharma. Without it, men would find it much harder to achieve enlightenment. Some would never be able to without the guiding counsel, written by the first of the 28 Buddhas.

The abbot of the monastery came to the god as he sat before the altar. “You have been here for three days, what troubles you?”

“Then, Lord, there is nothing for it. You must seek the aid of men.”

The Lord of Lighting raised his head, and quirked a white eyebrow.

“All men feel pride, if they are skilled in martial arts. Appeal to their pride, and you will find the most skilled warriors.”

So it was proclaimed that there would be a tournament, to find the most skilled warriors in the world. Many came from China and Japan and even from far-off America. There was even a woman. As they fought under the watchful eyes of the Lord of Combat, some won, some lost, and some died. At last there were but eight left.

And the Lord of Lightning cast an enchantment, that the whole force was transported to the demon-infested Outlands. And because they could not otherwise return, they fought the demon-folk.

There was the demon Shan Chi who was a sorcerer and caster of illusions;and he was beaten by the American Johnny

There was the demon Okame who was a succubus; and she was beaten by the woman Sonja

And there was the demon Orochi who was a many-headed dragon; and he was beaten by the Shaolin monk Liu Kang

And there were many other demons, each with their own form, and the Eight Warriors fought and defeated them all.

At last they came to the palace of the Demon King. And in the centre of his palace was a combat arena. On the one hand were the Holy Eight Warriors and the Lord of Lightning. And on the other hand was a demon horde, led by their King

“Dishonourable cur! Will you not fight one-on-one?” screamed Lord Raiden

“I’m a Demon – what exactly did you expect?” boomed the Demon King

And seven of the eight fought, with Lord Raiden. And the eighth, seeing that all were distracted by the fight, drew on the way of the ninja, and stole the book of the Dharma from the throne where it was. And the ninja read aloud from the 7th Discourse, where it says that Man is the last life before Nirvana, and man who dies with honour ….

The floor of the arena opened, and became a portal to the Realms of Men. And because of the inspiration of the book, the demons could not pass through.

So came home triumphantly the Warriors of Men. But Lord Raiden was to get no rest, for he must ever guard the Dharma from demons and evil men, who seek to turn its power to their own ends.

Many settings have the god of lightning and thunder as evil, or at the least neutral but violent. A benevolent lightning god is the perfect patron for fighters of evil forces; whether armed with swords, bows, or even arcane magics. He might even bestow elemental magics on his followers.

Shinto shrines might feature a statue of Rajin, but they would be unlikely to be full of treasure and guarded by monsters. Monasteries on the other hand, might have ancient holy books, special weapons or armor, or finely crafted artworks; and be guarded by little old men with brooms.

What is the Dharma? When you need to consult it, how do you choose to defeat Raiden, and whatever other guardians he is currently employing? You could fight him, try to persuade him, or even sneakily steal it. When you have it, who else is seeking it – and will now pursue your protagonists?