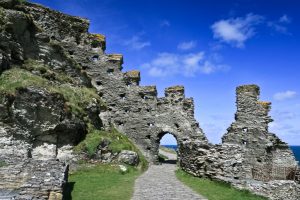 Uther drank the potion and his form changed into that of Gorlois, and he and two of his closest allies set out for Tintagel. There they slipped easily past the guards, and Arthur went to Ygrayne. Mary Stewart says Ygrayne knew it was Uther and not Gorlois, but Geoffrey of Monmouth doesn’t comment. It seems reasonable that the mother of Morgana Le Fey would have enough magic to see through the enchantment, so let’s take that option. That night, Arthur was conceived.

By sheer coincidence, that very night, or perhaps the next day, Gorlois was killed by Uther’s lieutenants. Interestingly, if Gorlois was not killed until after the conception then Arthur could not have legally inherited the throne! Gorlois’ death meant that Uther could take Ygrayne as his wife, and that she was persuaded to marry him. I’m going to pretend that isn’t a combination of survivor’s guilt and Stockholm syndrome.

There are other myths, most of them are variants on the above with slightly different details – many of them focus more on the lineage of various of the players. One telling, however, includes none of the above, and says that Arthur was washed up on the shores of Tintagel where he was found by Merlin – perhaps the idea of Arthur being conceived from mere sex like a normal person was too much for the teller to bear!

At no point after this do most myths suggest Uther, Ygrayne or Arthur ever visited the site again

The Castle (or lack thereof)

The ludicrous thing about the entire myth is that there was no castle on Tintagel at the time it was supposed to have happened!

Tintagel Island is not even an island – it is a small peninsula with a narrow strip of rock attaching it to the mainland on the North coast of Cornwall. There is evidence of occupation in the immediate area since about the third century when it was used by the Romans to import things from Southern Europe – more pottery from that period has been unearthed there than in the entire rest of Britain and Ireland – but there is no evidence of any buildings (future archaeology may change this of course, and many archaeologists believe it will eventually).

In the centuries after the fall of the Roman Empire, the site was inhabited and remained a trading port with the southern mediterranean. There is evidence that it was one of several high-status residences for local royalty, and some evidence of fortifications on the approach to the island date as early as the eighth century – but still it was no castle.

In 1225 Richard, First Earl of Cornwall, acquired the site, and in 1233 he started the construction of a castle on Tintagel Island. He deliberately had the castle constructed in an old-fashioned style so that it would hark back to the Arthurian myth, which was already connected with the site by Geoffrey of Monmouth. So the first actual castle built on the site was built to hark back to the myth that Arthur was conceived in a castle there before it was built…

Later Earls of Cornwall didn’t really care about the castle – one used parts of it as a prison and much of the land was used as pasture. About a hundred years after the castle was constructed the roof of the great hall was removed as it had not been maintained, and after that the castle fell even further into disrepair.

And yet, in the Victorian era there was a resurgence of interest in Arthurian myth, and in castles, so Tintagel became a tourist attraction (and if nothing else the scenery is beautiful enough to be worth a visit). Since then the ruins on Tintagel Island have been made safe, the sheep removed, and the place generally tidied up to attract visitors. The place is now one of English Heritage’s most popular tourist attractions. There has been controversy recently as an artist carved a face into the cliff near a place called Merlin’s Cave, where Merlin is said to have lived (and presumably where he found Arthur washed ashore). There is a new bridge being constructed as the connection to the island has been significantly eroded.

So Tintagel is anything but what it seems. It has more myth than history, and more varied history than the myths would suggest.

Perhaps in your stories the place is truly the heart of a nation. It could be the emotional heart where the Great King was born, or if the Great King is long dead it could be a place of pilgrimage, a place where all future kings must be seen to visit. Or it could be the political heart, where the kings hold court, blessed by the memory of the great king or (if you prefer the post-Roman leadership) in memory of the great empire which has fallen. Or maybe it is the economic heart – a bustling port town where rare and expensive goods are easily available because they are imported from far away through here.

What if it really were the birthplace of a great hero? Does his spirit still haunt the place? Does a great and powerful wizard live in the caves below the castle? What rare and powerful artifacts remain from that time? If it is not so desolate and dangerous that anyone could make the trip, do pregnant women make the journey in the hope that their child will be blessed as the Great Hero was? Or do young lovers sneak away here as an auspicious place for them to conceive (or even just have a little fun)?

But what if the myths were entirely true, but the place had been treated as Tintagel has? In the real world there is probably no angry wizard, no ghost of a great hero to rise up and smite an artist for his carvings, but in a fantasy world anything is possible. Merlin may not be happy about his home being defaced, or advertised – unless he is, and is seeking more visitors. The ghosts of Uther, Ygrayne, Gorlois, and who knows who else may have objected to Richard building a castle on the site, and any of them could see it as mocking them – Gorlois particularly would not want to be reminded of that war he lost – maybe that’s why Richard’s castle fell down so fast.