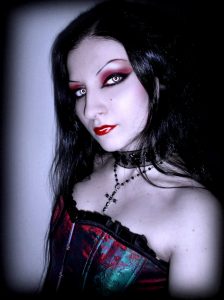 They’re everywhere today, usually as some teenage girl’s love interest, if we knew their history would we find them so attractive?

Though the concept of blood-drinking corpses is an old one, the exact forms have varied over time – and the modern vampire concept owes its shape to a surge in encounters in Eastern Europe during the “Age of Enlightenment”.

Whispers of vampires became louder in the late 17th century in the Balkans and most of Eastern Europe, with mass stakings of corpses to pin them into their coffins. From there the stories spread to the rest of Europe in tales of the ugly, pale creature that comes in the night to drink your blood – a vampiric human that lives forever, as long as they stay out of the sun, and looks like a corpse but never rots.

Over the years many stories have been told, they’re one of the best known monsters in pop culture and they feature prominently in YA and urban fantasy. But it is the stories of Carmilla and Dracula that gave birth to the vampire we know today, the killer that we fall in love with because they are always beautiful, that hypnotise us and change into animals at will. Taking humans as their partners turning them and loving them forever or killing them slowly in a state of ecstasy.
Those stories may well have drawn not just from the Eastern European vampire but from the Daemonologie written by King George, in which corpses could be inhabited by incubi and succubi, with properties similar to those of vampires but with more beauty and lust.

But what caused these stories of vampire to start, what are they really? Well many aspects of the physiology of vampire can be explained by diseases.

Porphyria is one of them, it is an inherited disease which comes in a few different forms – one of them is that the skin becomes sensitive to sunlight, if sufferers go out in the sun they blister and burn far worse than normal. This not only explains the idea that vampires don’t go out in the day it also provides their pale skin and the idea that they burn up in the sun.

Tuberculosis (TB) may be another disease from which the theories of vampires spawn. It is an airborne bacterial infection, that mostly affects the lungs of it victims – it often makes them turn very pale, with swellings in their neck, tiredness and fatigue, loss of appetite, weight loss and can cause them to cough up blood because of the damage to their lungs. All these symptoms have been mentioned as a sign that someone has been fed on by vampire in a lot of the old stories.

Catalepsy is a nervous condition that makes the body go rigid, it could be connected to the idea the vampire could stand so still. It also slows down someone’s heart and breathing rate meaning they may appear dead, and after some time they would be able to move again and the heart rate and breathing rate return to normal, so they may get back up after someone thought they were dead.

People understood less about how the body broke down after it died back then, how the body decomposed and the form that decomposition took, like how the hair, nails and teeth sometimes appear to grow for a few days after the death, as the skin covering their roots peels back, and how the decomposition of the body takes some time to set in, especially in cold places like the Balkans. After death gases in the body build up, these gases can make the body make noise and muscles move which means they sit up, move arms, legs or roll over when they are dead, and these gases also inflate the abdomen which makes the body look like it has gorged on something, and if you were to stab that inflated abdomen then it would rupture and fluids would drain out.

In a more mystical vein the reason they can’t be seen in mirrors is because it was once believed that mirrors allowed you to see people’s souls and vampires have no soul therefore they cannot be seen. The same applied for cameras when they were invented which is why they cannot be seen in a photograph or video in some stories.

Ideas for your story and games

You could write a story or game from the thralls’ or ghouls’ point of view, how they see the vampires.

What if the reason vampires never look the mirror is not because they can’t be seen but because they can truly see the nightmares in it instead – forcing them to regard their own monstrousness.

Since they can turn into an animal can they become stuck in that form, how do they feed in that form, is that where the first vampire bats came from?

If they lose their soul when they’re turned, what happen to their soul? Does it die or disappear, or does it become a ghost linked to the vampire forever seeing all the hell that they bring about?

Could you give a vampires a soul – and would they get their own back or a new one? This could be done as a curse of remorse, or maybe a vampire would quest for their return to humanity, or perhaps their lover could give them it – if so, did they go on a great quest to find a new soul or is it a heart shaking story where they give the vampire part of their own soul, so they are forever connected, in some ways the two are one. Perhaps a marriage ceremony might have this effect – possibly even surprising a vampire who was getting married to help hide their nature.