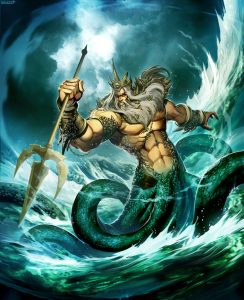 Poseidon, God of the Sea by Genzoman

Neptune is god of all the waters – seas, rivers and springs. He also has jurisdiction over horses, and by extension, travellers. For the Greeks, Poseidon was one of the most important gods – the brother of Zeus. and key to their coastal and island world.To the Romans, Neptune was less central – being a land-based rather than marine economy. But he was honored by certain segments of society – in particular, there was often a shrine to Neptune in any fort occupied by cavalry.

Like all the Classical gods, the Roman Neptune accepted sacrifices. He was honored as one of only three gods who accepted bulls (the others being Mars and Apollo) His temples were often found by springs and wells, or in tandem with Mars, or Minerva (with whom he made the first chariot), or as part of the three brothers of Earth Sky and Water – Pluto, Jupiter, and Neptune.

Possibly because of his multiplicitous origins – as a fusion of the sea gods of Sparta, Athens, and the Etruscans – Neptune has many spouses, and hundreds of children. This can be seen as symbolic of many rivers reaching the sea, each with their own guardian spirit. Wikipedia lists eighty, and other sources suggest more. There is also some indications that he may have also had male lovers.

The story I’ve chosen has Neptune (actually, Poseidon, but the two are closer than most Greek / Roman pairs) as an antagonist, but as well as being the father of monsters, Neptune also had a role as a protector from them. He is almost alway pictured with a trident, with which he was said to stir up storms or earthquakes, or calm them with the pommel end.

Perseus was flying across Greece, carrying the head of the Gorgon Medusa in a bag. As he flew low over one coastline, he saw a figure by the sea. Thinking it to be some statue, he swooped down for a closer look. As he drew near, he saw the statue move as the cold waves sprayed over it, and he saw that is was no statue, but a young maiden, chained to the rocks.

“Why are you chained out here?” asked the hero.

“I am Andromeda. My mother, Cassiopeia, is Queen here. She boasted that I was more beautiful than the Nereids – the daughters of Neptune. To punish her for her arrogance, Neptune sent a monster to ravage our settlements and eat our people. We consulted the Oracle, and the only way for the monster will go away is for me to be sacrificed to it”

Perseus felt that this was most unfair. He sat and talked to the maiden, calming her fears, and receiving her promise that he would battle the monster, but she should look away from the fight. Andromeda tried to dissuade him, but heroes are hard to persuade.

As the monster appeared on the horizon, Andromeda closed her eyes, sure that the monster would tear Perseus apart, and not wishing to see such a horrid sight. Perseus, being careful to avert his eyes, drew forth the Gorgon’s Head. It still retained its powers of petrification, and the sea-monster was turned to stone. Taking good care not to see it himself, he stowed the Head in its bag.

He drew his sharp sword and split the chains binding Andromeda.

And the hero carried her away, with his winged sandals, and lodged her with some peasant folk he trusted, before continuing with his quest.

Whilst temples to Neptune were relatively simple affairs, sacred areas included coves and caves – underwater grottoes that would make excellent dungeons – assuming you can breathe water. Expect to find a wide array of monsters – some beastly and some sentient. Treasures might be anything that has been shipwrecked – from Spanish doubloons to the Antikythera mechanism

Neptune’s followers were anyone who depended on the sea – not only fishermen and sailors but pirates! Not all pirates are from the Caribbean, there are stories of piracy from the Classical world (Julius Caesar was famously captured by pirates, and his escape and punishment of them is the beginning of his path to greatness) all the way to modern day pirates smuggling guns and drugs.

Spells he might grant would include summoning of sea creatures or water breathing, and water control. As Lord of both the sea and horses, he is also master of all kinds of spells of travel – from phantom steeds to flight to interplanar travel.

Neptune himself is powerful, but he has whole tribes of people at his command – nereids, merfolk and tritons. Any of these could appear as protagonists, antagonists or support characters – what strange wares might a merman merchant carry?

For a city that might be blessed by Neptune, check out The Floating City jigsaw piece.