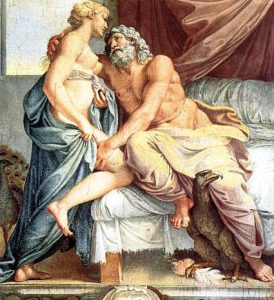 Juno and Jupiter together, by Annibale Carracci

Juno is the Eevee of Roman gods, constantly evolving in different directions. She started out as Hera, Greek goddess of marriage and childbirth. But when adopted by the Romans she collected titles – Capitolina reflected her role as patroness of the Roman State; Moneta from her connection with the moon – the word money comes from this root, as the Roman mint was part of the temple complex.

The differences between the two goddesses reflect differences between Greek and Roman women. Greek women were often required to stay virtually imprisoned in the gynaeceum – the women’s house. Athenian women had limited rights to property, while Spartan women had much more developed rights. The Romans adopted the Spartan model – women could own property, and often had considerable social influence.

Juno has a martial aspect – protecting the vulnerable – and hence appealed to by those law officers who protect and serve. Anyone whose role is defined by those whom they serve – from PAs to social workers to viziers – might have cause to call on Juno.

Because of her role in childbirth, no knots were permitted anywhere in the temple – a problem if you had no belt! Knots were believed to hinder a woman’s birthing – and hence wearing any would negate any favour from Juno.

Story of the God – Hatred

Hercules was the result of one of Jupiter’s many affairs, and incurred Juno’s hatred by the very fact of his existence. She resolved not to let this one grow up, to confound her vengeance. So, she sent a pair of serpents to his cradle. The infant Hercules strangled one in each hand, doubtless while burbling and giggling. To try to protect him, his mother sent him away to be raised by peasant strangers.

Hercules grew big and strong. He married and had two children. His life might have been peaceful. But eventually Juno found him, and sent a fit of madness such that, when he saw his wife approaching, he perceived them as enemies and slew them.

As penance for killing his wife and children, he was made to serve his half-brother, the cowardly King Eurystheus. He slew many monsters, captured others, and last of all borrowed Cerberus the faithful hound of Pluto.

He settled down with a new wife,Deianira. Once, she was attacked by a centaur. Hercules drove him off with his poisoned arrows, soaked in the blood of the Hydra. As the centaur lay dying, he told Deianira to soak a shirt in his blood and give it to her husband if he was ever unfaithful

Hercules was drinking and telling tales with his friends, and Juno caused Deinira to think that he was with another woman. She gave him the shirt, thinking it a magic charm to restore his love. But the shirt was a deadly poison, and unable to remove it, Hercules threw himself into a river, in an attempt to cool the fire, and drowned.

His deeds were so great that Jupiter declared that he would be received onto Olympus. Even Juno had to be reconciled to his divine self. She didn’t like it much, and he spent much time away – appearing in the dreams of heroes to inspire them to greater deeds.

Juno the jealous has more reason to turn up as the patron of adversaries than protagonists. She might support an order of police-ly paladins, but she’s more likely to be called on by the duke’s right hand man – or his wife. She would likely grant clerical powers of protection – or perhaps poison as vicious as her temper!

As demonstrated in the above story she also had a tendency to use underhanded means and illusions to punish those she disliked, often tricking their loved ones into betraying them. Those who have angered Juno have cause to fear their allies as well as their enemies.

Geese guarded her temples, which were relatively simple in plan. Other buildings might be supported by the temple nearby – priest houses, farms to raise sacrifices, the mint… add in the location of the temple in the centre of the city, and a raid on a temple of Juno might more resemble an urban heist than a dungeon crawl.

Juno’s holy day – the Matronalia.- was early March. A festival dedicated to respect for all women, and by extension all relationships seen as valid by that society, could be the jumping off point for all kinds of intrigue stories – by defining and celebrating what is proper, we also define what is taboo. Taboo means secrets, and what will people do – or have adventurers do for them – to protect those secrets?