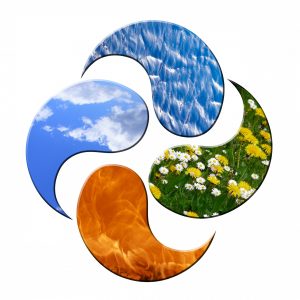 The base Elements of reality, or of mystical power, vary greatly between settings. In the real world their number is undefined (if we look at chemical elements they become increasingly shortlived as we go down the periodic table, with many being incapable of chemical interactions due to their tiny half-lives, while if we look at fundamental particles the list is incomplete and uncertain), but most settings that make use of them limit them rather more strictly – having them be well-understood phenomenon with a very definite list.

All can agree that Fire, Earth, Air and Water are classical elements, but there is commonly a fifth – Spirit, Void or Aether – representing things that are truly immaterial and cannot be felt in any way.

Looking at them in order of the complexity of assigning a colour to them:

Although the knowledge of white-hot flames is old, red fires were, and still are, by far the most common to encounter, with white flames requiring significant active effort to maintain in a forge or furnace.

Water is almost always blue. 1)The exception being the Wu Xing, which will be discussed further down.

Despite some modern claims to the contrary, this is an accurate description – water is a highly translucent liquid, but it is not truly transparent when in significant quantities. Lakes and seas do reflect the sky, but even if the sky is grey they maintain a blue tint all of their own.

Sea foam is white, and so are the lightest of clouds (unburdened by rain or storm) – and white is often seen as the closest colour available to “transparent” – so white is by far the most common colour for air. But in order to depict it in colour upon a white page, it is often made a light grey or faded sky blue. Very occasionally it is depicted as yellow, but such is far and away the exception

Earth is brown, grey or green. 2)With the Wu Xing being an exception once more

Earth’s colours are so complicated to pin down because what earth means is hard to pin down.

Earth is grey because the most solid examples are the purest form – metal and stone.

Earth is brown for the most commonly encountered of its forms – soil.

Earth is green because it represents the plants that grow from within the earth – it is the element of which their life is most composed.

Earth is, in the end, complicated. If you feel a need to subdivide the classical elements, if 4 is the wrong number for any reason, split Earth.

Aether is either without colour or lightning blue

Unlike Air, Aether is not merely transparent – it’s not physical at all, and therefore cannot have a colour. In fantasy it can occasionally be associated with bright blues, as a form of pure energy it relates well to lightning.

Spirit is either without colour or purple

Another non-physical element, spirit doesn’t have the association with energy that Aether does, but it does have a strong association with psychic powers – and those often come with a purple aura or halo.

Void is either without colour or truly black

Void has a connection with the physical realm more solid than that of Aether or Spirit, but whether it has colour or not depends on the nature of light rather than its own nature. If light is a physical thing that moves through places, then void is utterly black because there is no light in it. If light is simply the nature of how sight works, without being truly physical, void remains utterly colourless.

The chinese took my advice about Earth long before I gave it, creating the cycle of five elements known as the Wu Xing: Fire, Water, Earth, Metal, Wood

Water may be blue, but is more often black.

Blue is a primary colour in both the European tradition and modern science, but in China it has not traditionally been such – instead there is a bluish green colour among their primaries, one that doesn’t suit water particularly well, and is needed elsewhere in any case. It seems that black may have become the colour of water by default – being the closest primary colour not otherwise in use – but I don’t have the knowledge to say with certainty.

Sticking within their chosen primary colours, yellow is an obvious choice – especially given the fact that red has already been taken by fire.

The sheen of metal is not easily found in pigments, and so silver is not an option. Greys can be used, but their shine is lessened – and importantly, grey is not a primary colour. White, on the other hand is.

Wood is a rather mistranslated element. More accurately it would be living wood, or plants – green being the colour that is most tied to their life-force.

I hope you’ve enjoyed our month of colour. We’ll be back next month with a new theme.