Last week we showed you an unedited video of us playing with cards, and one of the planetary cards mentioned.

This week I think it’d be good to talk through a couple more cards – one from the Characters deck and one from the Locations.

First the Character. Why would you draw from the characters deck?
The most common reason is that the players decide they want to talk to a local, or someone travelling with them, or whoever – and you haven’t actually planned the details of that particular bit of background scenario.

Between sessions you might instead draw cards to plan your next adventure. While planets or station locations may be more common sources of adventure, the characters involved are what make a story truly gripping, so drawing a few of both is often the best idea.

So, on to the example: 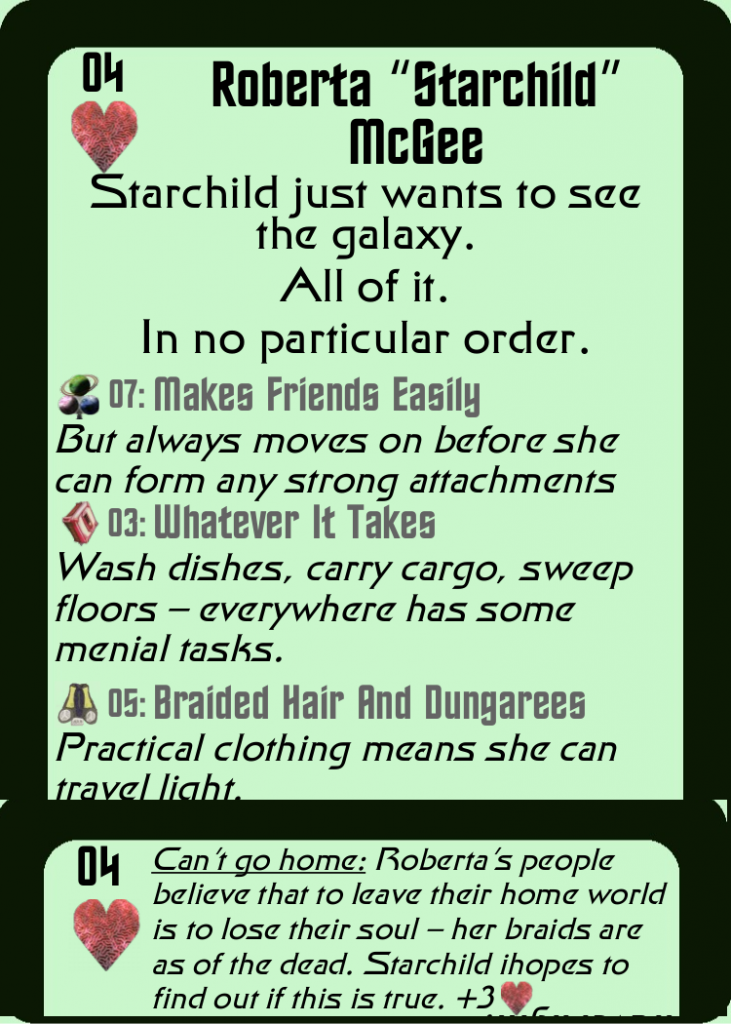 We’ve flipped the secret because it’s easier than you flipping your monitor.

Roberta, even more so than most characters, is capable of turning up anywhere – possibly even showing up repeatedly on different planets.

My immediate interpretation is that she’s one of the characters that falls into the category of “NPC Adventurer”, someone who is likely to deal with problems rather than screaming and running away.

The value of her hearts makes it clear that while she has a meaningful desire something about it is lackluster – she wants to see everywhere, but not only is that impossible, she doesn’t even have a plan!

The value of her clubs suit (above average with a 7) tells us that she’s well-connected, despite the constant movement – she doesn’t stick around but the friends she leaves behinds are still friends, and new ones are a constant.

Her diamonds (profession) is “Whatever it Takes” gives a lot more depth to her character – she’s not a spoiled noble brat, she’s travelling on her own dime, on her own blood, sweat, and tears.

The spades describes her, while also reinforcing the fact that she’s self-mobile.

The secret is the key to building a whole plot around her – she wants to prove that she still has a soul, which is not an easy task in a science fiction world where souls may not even exist in the first place! If the players get interested you may find yourself leading them on a trail of mystics and priests, looking for someone who can actually prove that their spirituality is reality.

Now onto the Location. Again, you might draw this when planning a session, or you might draw it when your players decide to wander down another corridor or another street, and need somewhere interesting to walk into – somewhere other than the adventure that you’d originally planned.

You might get to point them back at the plot, or perhaps you’ll find the card gives you a whole new plot: 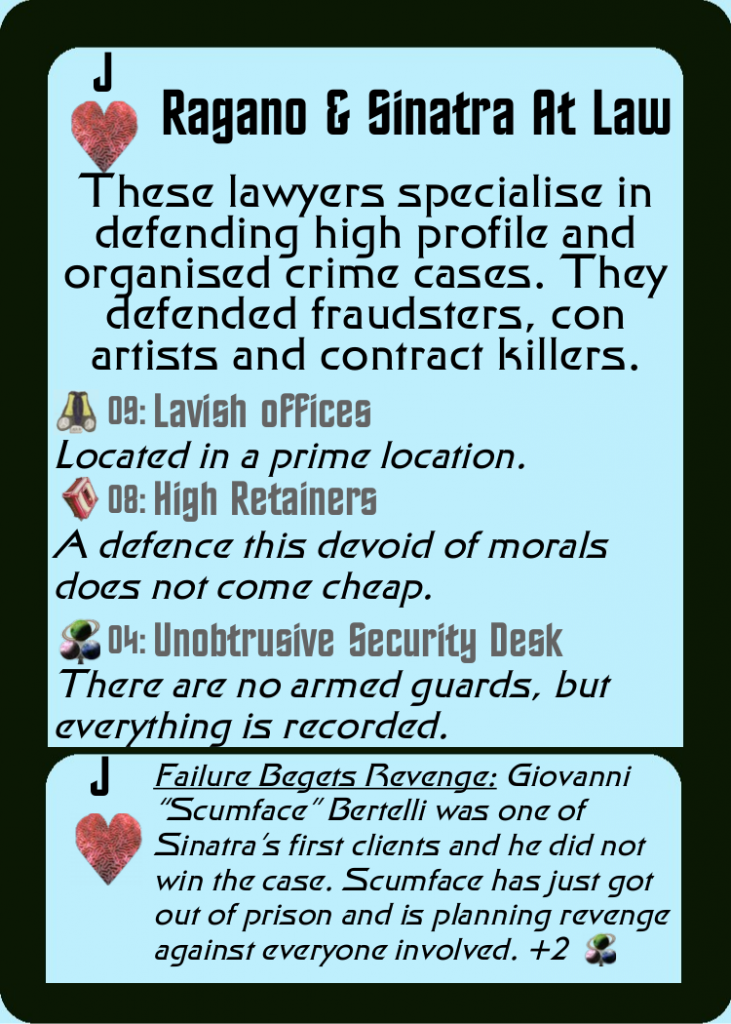 A high hearts in locations means that the place is host to important people – in this case an extremely competent law firm.

The spades and diamonds both reinforce that these are skilled lawyers – but not kind ones. Still, they might be useful for adventurous types like player characters, who break laws in order to do what’s necessary.

And even if the PCs don’t have enough money to pay them, the secret provides an obvious out: They’re in need of protection, just the sort of story the PCs are used to sorting!