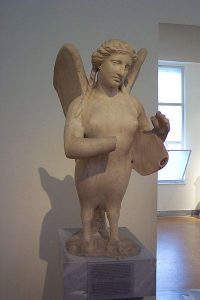 Sirens are one of those monsters that has changed a lot over the years, so they’ve got quite a history:

These beautiful singing ladies that bring sailors to their doom are best known through greek myth, but there are many stories of them, or very similar creatures, from different times and places in the world.

One of the first greek stories told of how they were Persephone’s three handmaidens: when she was kidnapped by Hades Demeter gave them wings, so they could search for her, and their singing voices to call her home with. When they failed to find them Demeter cursed them to only live until a man has heard them and managed to pass them by.

Another story tells of the three sirens losing a singing competition to the muses, and when they did so the muses plucked off their feathers so that their disgrace would be visible – so they threw themselves in the sea and became islands.

Both of them link nicely into the idea from another story where they were the daughters of Poseidon (since he is the father of monsters) but they still had feathers they were like seabirds – indicating where land is but without a clean path it might bring you to your doom.

The story of their relation to Poseidon may be the start of their shape changing – since Poseidon is god of the sea, depicted as part fish and connected to mermaids (and mermen, such as Triton).

The Sirens turn up in both The Argonautica and The Odyssey and many a sailor’s story throughout the centuries tell of how they saw mermaids and sirens and lost there ships and nery there live or know someone who had. These stories were part of the gradual change of the Siren’s form mixing and changing over time telling of how the mermaid sing to them to draw them close therefore taking on some of the siren’s qualities and therefore in story they became the same thing. so as can be seen the stories have changed their appearance over time but what set it firmly into its new shape was the paintings from the renaissance period, where they are depicted as a woman in water or a mermaid or some mixture of the two – thanks to this what we see them as – both in the media and our mind’s eye is very far from their original description.